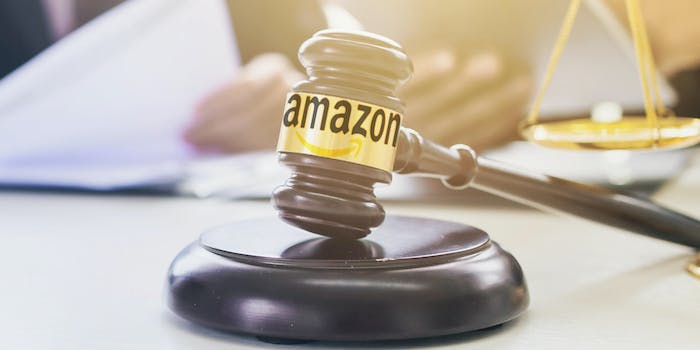 'Amazon continually rewrote the rules of the game to ensure that it always won and DSPs lost.'

A former Amazon delivery contractor is suing the tech giant, accusing it of making it impossible for her Delivery Service Partner business to make a profit because of its performance metrics.

Ahaji Amos filed a suit against Amazon in North Carolina, claiming that the tech giant advertised that Delivery Service Partners (DSP), third-party business that deliver packages, could earn between $75,000 and $300,000 annually. Amos created one, Kirk Amos Delivery and Courier LLC, and hired drivers to deliver Amazon Prime packages between August 2019 and April 2021.

However, throughout her time as an Amazon DSP, the company did not tell her the costs she would be responsible for and made it “nearly unattainable” for her business to achieve weekly scores from Amazon that would lead to bonuses and make the business profitable. The scores ranged from “Poor” to “Fantastic” or “Fantastic Plus,” both of which come with bonuses for DSPs, according to the lawsuit.

“The program policies increased DSP performance standards to the point that they could not be achieved while retaining profitability. Essentially, Amazon continually rewrote the rules of the game to ensure that it always won and DSPs lost,” the lawsuit reads, later adding: “Under the DSP program, DSPs, including Amos, through Kirk Amos LLC, were not profitable unless the DSP achieved scores of Fantastic or Fantastic Plus and thereby obtained bonuses.”

The ratings were based on a number of “oft-changing” metrics that Amazon “unilaterally evaluated” like delivery completion rates, safe driving scores, distraction rates, seatbelt off rates, and quality of the picture taken of packages that were delivered, the suit alleges. In order to obtain the high-performance metrics to get those high ranks, there were “increased risks to driver safety.”

Amos was also not allowed to appeal or challenge decisions made by Amazon to “discipline, retrain or terminate” her drivers. The company also need to approve all hires and did not reimburse her for background checks that were required for all new hires, according to the suit.

As Bloomberg reported in October last year, this isn’t the first time delivery contractors have sued Amazon for “unreasonable” expectations. Two contractors alleged in their lawsuit that Amazon forced them to pay for overtime because drivers couldn’t meet Amazon’s expectations for the number of deliveries during a 10-hour shift and misrepresented driver pay rates, forcing the contractors to fill in the gaps.