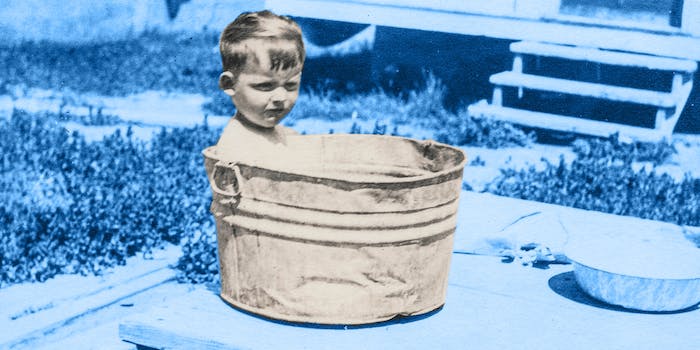 Of course ALSA is trying to trademark ‘ice bucket challenge’

If anybody really "invented" the challenge, it's the Internet, which has slowly molded variations for more than year.

Update: The ALSA announced late Friday afternoon that it has dropped its application to trademark ‘ice bucket challenge.’ The nonprofit said it did so in response to “the public’s concern” with the move.

@heneghanp – 3/4 – families who initiated the challenge this summer. However, we understand the public’s concern & are withdrawing the

@heneghanp – 4/4 – trademark applications. We appreciate the generosity and enthusiasm of everyone who has taken the challenge and donated.

Here’s the ugly side of memes and money: The charity that’s made some $100 million from the ice bucket challenge does not want to share the stunt.

To wit, the ALS Association has applied with the U.S. Patent and Trademark Office to trademark the phrase “Ice Bucket Challenge.” In a statement, the ALSA said of the trademark that:

We secured the blessing of the families who initiated the challenge, which they provided without hesitation. The Association did this as a good faith effort to protect the integrity of the Ice Bucket Challenge.

Problem is, no one at the ALSA is responsible for coming up with the phrase “ice bucket challenge,” the act of getting cold for charity, of that coldness coming from a bucket of ice water, of doing it for the Internet, of calling out someone to do it within 24 hours, or any combination of those.

There’s no doubt that the ALSA has cornered the market on the phrase. Google searches of “ice bucket challenge” dovetail with ALS, and you’ll be hard-pressed to find someone who doesn’t think the two are completely interconnected. Certainly no charity has gotten a fraction of the money from the meme that the ASLA has.

But the ALSA is only connected to the challenge because of a few minor sports celebrities who decided to take an existing charity stunt and point it toward ALS in particular.

Like so much of Internet culture, the ice bucket challenge is a meme that evolved as it spread. As a Slate investigation found, people have been doing an “ice challenge,” which means pouring a bucket of ice on your head and calling out friends, since at least May. And if you’re willing to expand your definition a little bit, the idea has a long, winding history.

Back in March, people in Tennessee tasked friends with either jumping in cold water or helping pay for a young girl’s service dog. A number of American Christian groups followed that same concept for various charities at least that early. These French girls were doing the “ice challenge” at a frantic pace in 2013, though a review of that video by several Daily Dot employees who speak a little French didn’t reveal any references to charity.

In June, Golf Digest wrote of the habit of golfers pouring ice on their heads if called out by somebody else; if they don’t, “they have to donate $100 to a charity of the person who called them out’s choosing.” It swept through men’s and women’s golf; by mid July, Chris Kennedy, on a minor league Florida tour, made his challenge specifically about ALS. On July 31, former college baseball star Pete Frates, himself stricken with ALS, became the de facto hero of the movement.

In its statement, the ALSA said it “took steps to trademark the Ice Bucket Challenge after seeing many examples of unscrupulous profiteers trying to drive revenue to themselves, instead of the fight against ALS.” When asked if it would sue other charities for using similar charges, a spokeswoman was vague, telling the Daily Dot that she “can’t speak to any action that would be taken against other charities.” The ALSA didn’t respond to a request for examples of profiteers trying to make money from the challenge.

Though the Daily Dot didn’t find people trying to make a buck by doing the challenge, there is a wellspring of activists who pour various substances on their heads to bring attention to their own cause. Those range from rubble in solidarity for Palestinians, to, um, apparent feces to protest corruption in Bosnian politics.