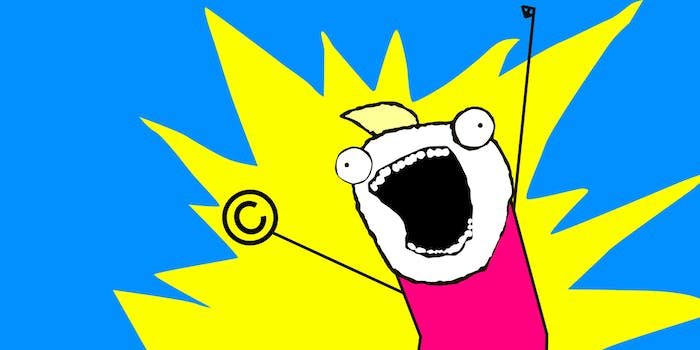 Hyperbole and a Half | Remix by Jason Reed

Did this Silicon Valley startup rip-off a popular webcomic?

'Hire all the engineers!'

If you’re driving down the 101 freeway in Silicon Valley, you might notice a familiar meme—a take on the “X all the Y” meme for AppLovin to “Hire all the engineers!”

AppLovin, a mobile development startup, regularly uses memes like “You Don’t Say” and “Aw Yeah” to recruit new team members. These immediately recognizable illustrations are meant to celebrate Internet culture, but the company has come under scrutiny its use of “X all the Y.” That’s because it’s not just a meme. It’s Allie Brosh’s copyrighted artwork.

@williampietri @inreallifealex yeah she doesn't even mention commercial uses of her work re-appropriated. Not legally OK.

Brosh, popular artist and author of webcomic Hyperbole and a Half, launched the meme into Internet fame back in 2010 with her piece, “This is why I’ll never be an adult,” a story about the emotional toll that everyday responsibilities can take on a person and her day-to-day activities, from grocery shopping to cleaning. It quickly became a canvas for other people to illustrate a variety of emotions and sparked a number of wacky derivatives inspired by her work.

AppLovin’s advertisement says: “Hire all the engineers!” The company changed the T-shirt from pink to blue, which some interpreted to gender the character from a female to male representative, though AppLovin said it was just to comply with company colors. Complaints as far back as July have asked whether AppLovin used this comic appropriately.

AppLovin did not pay Brosh for her work but said the company contacted her multiple times to try and get permission to license her artwork for the ad and give her compensation. Brosh never replied to their requests, so the company turned to the FAQ page on her site to see whether she allows commercialization of her images.

My stories and drawings are copyrighted, but as long as you attribute your use of my images/words correctly (with a link to the source of the material), it should be fine. But please don’t completely repost anything (that’s such a gray area and it has worked out horribly for me in the past). Problems only arise when you use my work in a way that suggests you’re trying to pass it off as your own. I work very hard to create these posts and it hurts my livelihood when my work is reposted without credit (websites like funnyjunk.com are horrible about this.) Plagiarism always hurts the artist.

Though there’s no mention of commercial uses in the FAQ, the company interpreted this as permission to use it, and they credited Brosh on the billboard. However, the blog post of the original illustration says it’s copyrighted for non-commercial use. (Brosh did not respond to the Daily Dot’s interview request.)

Hyperbole and a Half

“Our goal here was to celebrate memes, and in the case of ‘X all the Y,’ celebrate the original artist, too, which is why we credited Ms. Brosh on the billboard and contacted her multiple times to see if she was interested in compensation,” Katie Jansen, AppLovin’s vice president of corporate marketing, said in a statement to the Daily Dot. “We understand that those advocating for the artist and what they perceive as unfair use are doing so out of respect for her, and we can’t fault them on that, but we don’t feel this is the case.”

This issue raises the question: When is a meme something that can be advertised, and when is it artwork? For Brosh, that line is clear. In a 2014 interview with Lightspeed magazine, she discussed having issues with people advertising her work on bus ads and convenience stores; she doesn’t want people to use it for things she might not support, and while she doesn’t have time to go after everyone who uses it, sometimes lawyers do get involved.

I’ve just finished dealing with a billboard that 7-11 Mexico ran that was using the same image, and we had to be like, “Hey, that’s not okay.” We don’t want to set a bad precedent, where I just let anybody use this thing to promote whatever they want. So we had to say, “Hey guys, this isn’t okay.” We got lawyers involved and everything, and that was a long process that I am dreading repeating, but we’ll get to that after all the book stuff has settled down.

Brosh isn’t the only one whose had copyrighted memes used out of context. Carlos Ramirez, the creator of Trollface, makes money from people or companies that use his copyrighted image. Though he created the popular meme in 2008, he didn’t register it with the copyright office until 2010. Since then, as Gizmodo reports, he’s made over $100,000 thanks to the graphic.

In one instance, Ramirez had the video game Meme Run pulled from the eShop on Wii U for charging people to play a game that included his copyrighted illustration.

Another meme controversy in the spotlight recently is the Socially Awkward Penguin. Getty, the company who owns the rights to the image taken by National Geographic photographer George Mobley used in the meme, has “pursued certain uses” of the meme, most recently targeting a German blog with a request for $868.39 or a lawsuit for using the image.

But if there’s no obvious copyright and memes are prolific, it raises questions about when it’s OK for people to use them online, in publications, and in advertising. According to Parker Higgins, the Electronic Frontier Foundation’s director of copyright activism, there’s no real concrete answer.

The ad using Brosh’s artwork is straightforward, Higgins says, because it’s from a well-known artist who has copyrighted her work. For other meme creators, though, it might be different.

“So we don’t have, in terms of display images or display ads like this, we don’t have any kind of compulsory license,” Higgins said. “You get to choose whether or not you license it out. And if you don’t get a license, then either you’re making it fair use, or you don’t get to use it.”

Everyone from scholars to lawyers are thinking about memes, and what they mean for content and culture. Are we better served when our crowdsourced and sharing economy is subjected by strict copyright controls?

“Memes are one thing that people are thinking about,” Higgins said. “Anthropologists are thinking about it in terms of trying to track the providence and the spread, and legal scholars are curious about this. And memes are the tip of this iceberg where there’s all sorts of stuff that people create and share and build on every single day, and there’s not even a limited copyright.”

Memes in advertising don’t seem to be going anywhere, and AppLovin’s perceived success might actually inspire other people to follow suit.

“The AppLovin campaign has been very well received here by other advertisers here in the market,” Joe Cunningham, vice president of sales at ClearChannel, said in a statement to the Daily Dot. “Quite a few of our existing clients and new prospects have mentioned their desire to develop something similar due to the campaigns popularity and eye-catching creative.”

If companies want to use beloved images from Internet culture, they should make sure they fall under fair use, Higgins notes, or get the artist’s permission and pay them, first. Otherwise, what might be meant as a celebratory ad could instead be taking advantage of someone’s work.

Photo via Hyperbole and a Half | Remix by Jason Reed