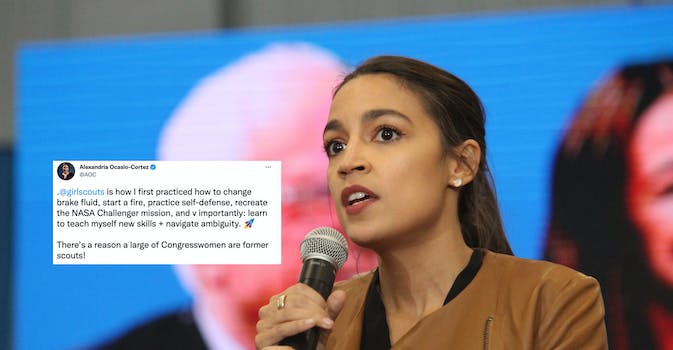 AOC claimed, among others things, to have recreated the deadly space shuttle Challenger disaster.

An old tweet from Rep. Alexandria Ocasio-Cortez (D-N.Y.) is confusing Twitter users once again after suddenly going viral this week.

The tweet, which surrounds the politician’s positive views on the Girl Scouts of the USA, included what many felt were several bizarre claims regarding the organization.

Ocasio-Cortez, who made the tweet in March 2019, credited the group with allegedly teaching her numerous things including how to change “brake fluid” and how to “recreate the NASA Challenger mission.”

“[email protected] is how I first practiced how to change brake fluid, start a fire, practice self-defense, recreate the NASA Challenger mission, and v importantly: learn to teach myself new skills + navigate ambiguity,” she wrote. “There’s a reason a large of Congresswomen are former scouts!”

The tweet appears to have gone viral once again due to the 36-year anniversary of the space shuttle Challenger disaster, a tragic event that saw the flight’s seven crew members die after the spacecraft broke apart shortly after launch on Jan. 28, 1986.

After Twitter users began coming across Ocasio-Cortez’s old tweet, many began asking why the politician would have been taught how to recreate a deadly space mission.

Prominent conservative commentators such as Ben Shapiro quickly began weighing in on the tweet.

Emily Zanotti, a senior editor with Fox News, likewise expressed her astonishment at the politician’s remarks.

But the reference to the disastrous mission wasn’t the only claim in her tweet that raised eyebrows. The claim of learning how to change brake fluid was also suspect to many.

“The only time I’ve ever ‘changed brake fluid’ is when I replaced the master cylinder on my ‘77 Ford Granada back in HS,” one user wrote. “And why the hell would you ever have children recreate an exploding space shuttle that killed seven astronauts??”

“I feel like the only way @AOC could even remotely recreate the challenger mission was if she actually tried to change her own break fluid,” another user quipped.

Some were so astonished that they questioned whether the tweet was actually intended to be a parody.

“Is this tweet parody? Recreated a mission that obliterated the entire crew? Changed brake fluid?” one user added. “When I was in the boy scouts I learned how to skin a grizzly bear and we recreated the Princess Diana crash.”

Numerous users suggested that Ocasio-Cortez may have been referring to an oil change or even a tire change given that brake fluid is technically flushed and not changed.

As of Friday afternoon, Ocasio-Cortez has not remarked on the newfound attention on her old tweet or made mention of the Challenger disaster’s anniversary.