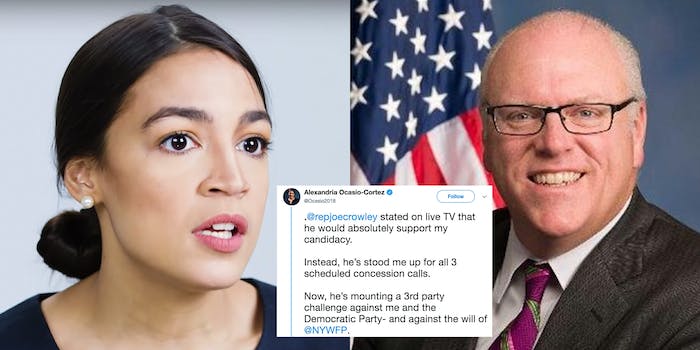 Someone's got a lot of explaining to do.

When progressive candidate Alexandria Ocasio-Cortez won the Democratic primary in New York’s 14th congressional district last month, it was the victory heard around the world. Now it looks like she has another battle before November.

Due to outdated and convoluted election policies, Ocasio-Cortez, a Democratic Socialist, will have to share the ballot with Joseph Crowley, the 20-year incumbent she beat in July.

During the primaries, Crowley was endorsed by the Working Families Party, a grassroots party of union activists and progressives. Bill Lipton, the party’s state director, asked Crowley to vacate the line after Ocasio-Cortez’s victory. In order to do that, Crowley had to run for another office on the ballot, one that he would most likely lose (the New York Times explains this policy in detail here).

The incident sparked a debate on Twitter between Ocasio-Cortez and Crowley. Ocasio-Cortez tweeted that he had ignored her calls and was “mounting a 3rd party challenge” against her, despite stating that he would support her candidacy.

[email protected] stated on live TV that he would absolutely support my candidacy.

Instead, he’s stood me up for all 3 scheduled concession calls.

Now, he’s mounting a 3rd party challenge against me and the Democratic Party- and against the will of @NYWFP.https://t.co/Xvb6Jk8N8q

Crowley maintained his support for her in a response and said that her team had not returned his phone calls. He added that he was not “willing to air grievances on Twitter.”

Alexandria, the race is over and Democrats need to come together. I’ve made my support for you clear and the fact that I’m not running. We’ve scheduled phone calls and your team has not followed through. I’d like to connect but I’m not willing to air grievances on Twitter. https://t.co/hxEeWEpI2O

Regarding the Working Families party endorsement, he tweeted that in order to be removed from the ballot, he had to either move of out of the state, die, be convicted or a crime, or accept a nomination in a place he didn’t reside.

“I don’t plan on moving out of New York, have a clean record, hope God’s will is that I don’t die, and won’t commit what I honestly believe to be election fraud,” he wrote in his last post.

Lots questions about WFP line. Was honored to have their support. I’m not running. For record you can only be removed from the ballot if 1) you move out of NY; 2) die; 3) be convicted of a crime; 4) accept a nomination for another office (in a place I don’t live).

I don’t plan on moving out of New York, have a clean record, hope God’s will is that I don’t die, and won’t commit what I honestly believe to be election fraud. https://t.co/Cxk3s5zALi

In a statement today, Lipton once again urged Crowley to vacate the line—and to move out of New York.

“It is disappointing that Crowley has refused to vacate the Working Families Party ballot line,” Lipton said. “The only remaining way for Crowley to do the right thing is to switch his residency to Virginia, where his family resides and his children already go to school. It would fix the problem he created in an instant.”