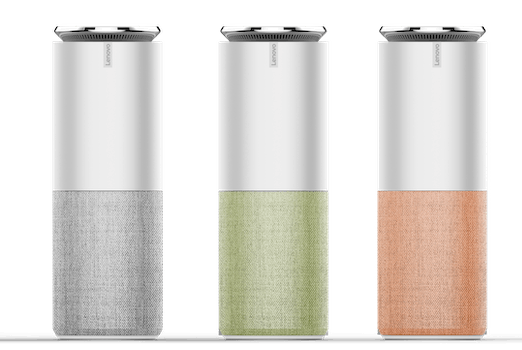 Amazon’s Alexa voice-powered AI seems to be taking over the world—or at least your home. A number of companies announced integrations with the audio-based digital assistant today, as well as one entirely new Alexa device built by Lenovo.

Called simply the Smart Assistant, Lenovo’s take on the Amazon Echo looks familiar, but differs from Amazon’s assistant in a few ways. Firstly, Lenovo’s model is cheaper. It starts at $129.99 ($50 less than Amazon’s Echo) and comes in three colors: light gray, orange, and green. With eight 360-degree far field mics on board, it can pick up your voice commands from up to 16 feet away. And if music playback is primarily why you’re buying it, you can instead opt for a $179.99 black Harman Kardon edition. This should offer greater audio depth and clarity than existing Alexa-powered speakers, thanks to an extra two-inch sound cavity inside. Both versions ship this May.

And then there’s all that Alexa can do. Soon, you’ll be able to use Alexa to command your Hopper DVR, telling it to do things such as “Play the Warriors game” or “Find comedy movies.” If you’re otherwise happy with your current TV setup, this is a cheap, effective way to get smart TV features without dropping a grand on a new set itself.

If you are in the market for a new TV, however, models from Westinghouse, Element, and Seiki (available at Walmart, Target, and Best Buy) will come built with Amazon Fire TV OS, and thus will be controllable by Amazon Echo. All the models are 4K resolution and range in size from 43 to 65 inches.

Whirlpool appliances will also be able to connect to Alexa, so you can tell Alexa to start the washer or dryer, or check if the oven is on without getting off the couch. New Belkin WeMo smart plugs and dimmer switches will also work with Alexa when they’re available later this month.

Up until now, Apple’s HomeKit has been one of the easiest ways to interconnect your smart home products, but Amazon is quickly proving that it wants to be the center of your connected home universe.