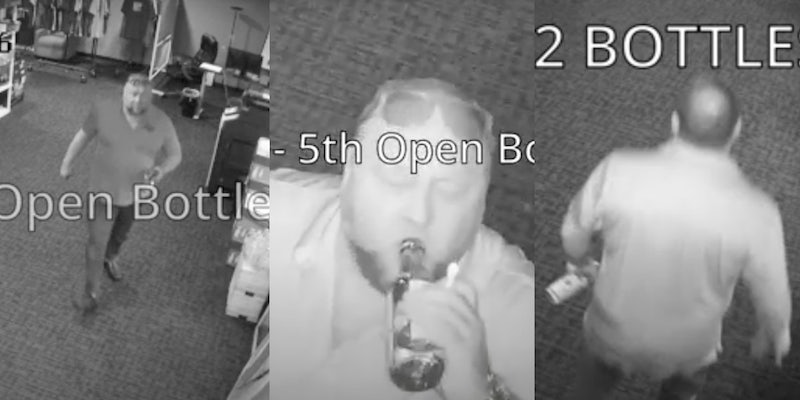 The video claims Jones consumed 8 bottles of alcohol in a week.

Video obtained by the Daily Dot shows security camera footage of Alex Jones repeatedly pouring himself what’s alleged to be alcohol numerous times over the course of multiple days. The footage claims the InfoWars host has at least seven drinks in a single day.

A link to the video has been posted into the text caption on videos on Alex Jones’ banned.video and Bitchute hosting platforms at least several times today, as well as added to the bio for the page for the Alex Jones Show on banned.video.

It appears that it is being posted without InfoWars’ permission, as the Daily Dot has noticed that the link has been removed from some videos it appears on, only to reappear on other videos.

It is unclear if InfoWars backend hosting channels have been compromised, if it’s the work of hackers or someone with access to the channels.

The link goes to a file hosting site, a page that appears to be run by someone alleging to be a Groyper, a group of young white nationalists.

The file is titled “Don’t Spy on Your Employees.”

The video is a supercut that appears to show Alex Jones consuming at least a bottle of alcohol over the course of a day, routinely going to a closet where he either drinks something from a bottle, adds something to a cup, or walks off with something.

On the first day, from Sept. 24, the surveillance footage begins at 11:40am and shows Jones approaching the cabinet and pulling out a bottle. By 2:30pm, the video claims Jones has consumed one bottle of alcohol and opened another. It does not list the sizes or types of alcohol, although some of the images appear to be of standard 750ml bottles of liquor.

The video alleges that over the course of a seven-day span, Jones consumed 8 bottles.

Jones does have a history with drinking, having been arrested for drunk driving in March 2020. A piece in the New York Times in 2019 also claimed that Jones would drink vodka while driving.

Jones is embroiled in a number of lawsuits over his Sandy Hook denialism. In one, a judge ordered Jones pay $50 million in damages to the parents of a child killed in the 2012 mass shooting.

InfoWars did not respond to a request for comment from the Daily Dot.