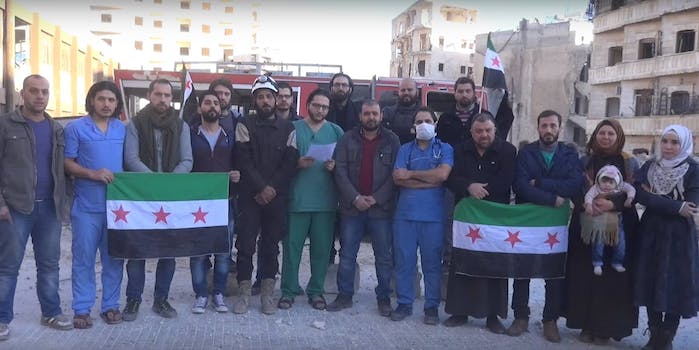 'It has been almost six years and we are wondering what the world was doing?'

From a city under seige, a group of people in Aleppo, Syria, filmed this desperate message to the rest of the world.

“Both Russian and Syrian regime air forces are intentionally targeting the civilian infrastructure,” says Dr. Hamza al-Khatib, standing among a crowd of activists that includes doctors and nurses. “People are afraid to go to the hospital.”

He estimates that  271,536 people are trapped in Eastern Aleppo, facing death from bombardment and starvation.

“The dysfunctionality of the world is responsible,” he says.

In a plea to the U.N. and world leaders, the message asks for the international community to end Bashar al-Assad’s bombing campaign, and to send airdrops of humanitarian aid to the citizens of Aleppo.

“It has been almost six years and we are wondering what the world was doing?” al-Khatib adds.