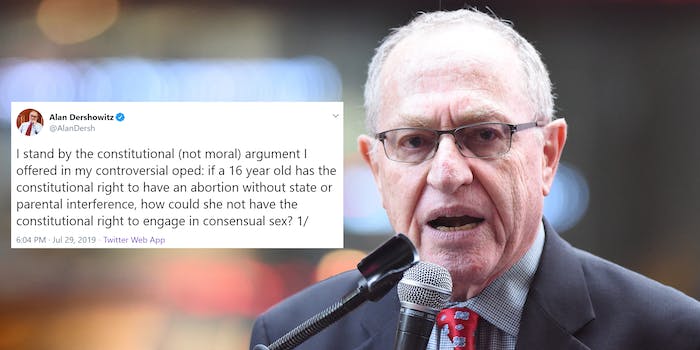 Alan Dershowitz takes on the age of consent via Twitter.

Among the many claims to fame for fabled lawyer Alan Dershowitz—which include representing O.J. Simpson and getting shunned on Martha’s Vineyard for supporting President Donald Trump—was his help in representing financier Jeffrey Epstein back when he was arrested on child prostitution charges.

Dershowitz helped Epstein secure a one-year sentence in 2008, with a no-prosecution agreement going forward. Epstein is now accused of trafficking and pimping hundreds of underage girls.

Dersh himself may have been involved as well, as one of the reports from the Miami Herald that brought the Epstein case to light claimed he received massages at Epstein’s Florida mansion, among other claims. According to the Cut, Virginia Roberts Giuffre says that at 17, she was trafficked by Epstein to Dershowitz. She says they eventually had sex six times.

Dersh was responding to an unearthed op-ed where he called statutory rape an “outdated” concept, which was mentioned in a New Yorker feature on Dershowitz that ran this week.

And while he said he was strictly making what he calls a “constitutional argument” and not a moral one, maybe the microblogging platform isn’t exactly the place to make it, especially in light of the accusations.

You’re such a disgraced man and the truth is coming out!

thank you for numbering your perv thread

When I think of all the things I knew a Trump administration would manifest, I did not anticipate so much pedophelia. #CreepyDershowitz

Dershowitz’s mentions were full of baffled users tweeting their disapproval for his statement, including the hashtag “#CreepyDershowitz.”