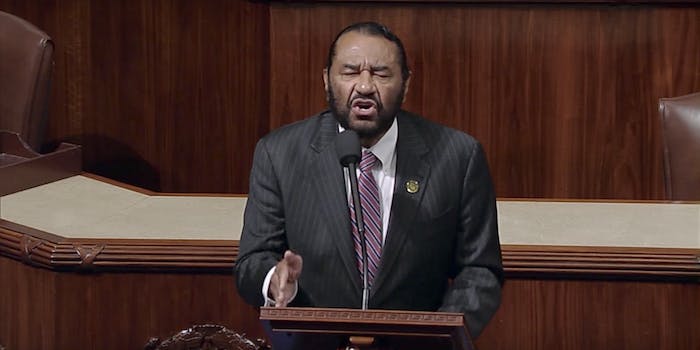 The calls made to him were overtly racist.

The voicemail messages came after a passionate speech Green made on Wednesday where he said Trump’s surprise firing of FBI Director James Comey, amid the agency’s investigation into possible links between his campaign and Russia, warranted the House of Representatives to begin the process of impeaching the president.

“Mr. Speaker, we cannot allow this to go unchecked,” Green said last week. “The president is not above the law.”

Following his speech, several people called his offices and made death threats that contained several racial slurs directed toward Green, who is black.

The congressman posted three of the calls on his YouTube page.

“Hey, Al Green, we’ve got an impeachment for ya, it’s going to be yours,” another one said. “Was actually gonna give you a short trial before we hang your n****r ass.”

Green played the recordings during a town hall event last week, the Houston Chronicle reported, asking those in attendance to “decide for yourself what we’re dealing with.”

Other Democratic lawmakers have said impeachment of Trump is on the table, but Green was the first member of Congress to recommend beginning the process on the floor of the House of Representatives.