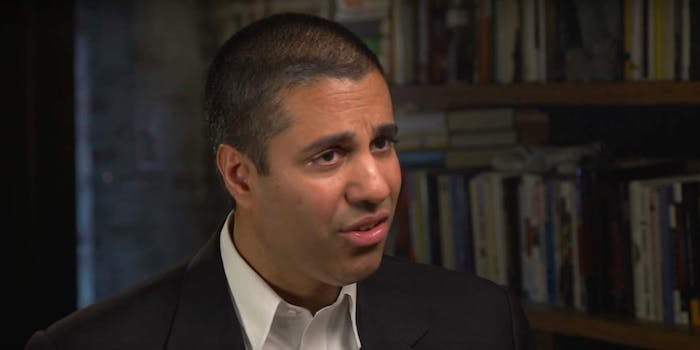 A man who allegedly made death threats against FCC Chairman Ajit Pai was arrested Friday, according to the Justice Department.

In his emails, Man allegedly said Pai was responsible for the suicide of a child because of the net neutrality repeal and threatened to kill Pai’s family members, listing three locations around Arlington, Virginia. In another email, Man allegedly sent another message that, according to the Justice Department, “had no message in its body, but included an image depicting Chairman Pai and, in the foreground and slightly out of focus, a framed photograph of Chairman Pai and his family.”

The FBI confronted Man in May, and Man allegedly confessed to sending the email that threatened Pai’s family. The U.S. Attorney’s office said Man claimed he was “angry” about net neutrality and that he sent the email to “scare” Pai.

If convicted, Man could face up to 10 years in prison, though the Justice Department pointed out in its press release that sentences for federal crimes are usually less than the maximum sentences.

Net neutrality—which basically made sure all internet traffic was treated equally—was officially repealed earlier this month, but as the Daily Dot’s Andrew Wyrich wrote, “There might be a lot of doom-and-gloom among portions of the internet, there is still long road ahead in the fight to save net neutrality.”