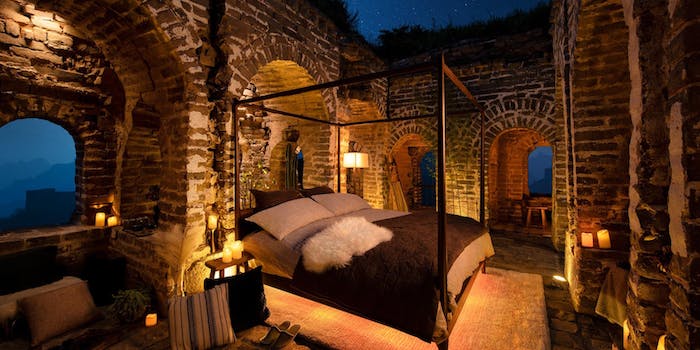 People on Chinese social media had mixed reactions to the idea.

On Aug. 1, Airbnb announced a unique opportunity: a contest for a chance to win a stay at the Great Wall of China. Not in a home, condo, yurt, or campsite nearby, but rather in a custom home built within one of the Great Wall’s towers.

“While there was an agreement in place that was the basis for the announcement of this event, we deeply respect the feedback we have received,” the company said in an updated statement on its website. “We have made the decision to not move forward with this event and instead we are working on a range of other experiences and initiatives that showcase China as a destination.”

Airbnb originally described the experience as a “one-of-a-kind modern bedroom created within a centuries-old tower perched along the Wall.” The tower has 360-degree views of the sky and surrounding Chinese countryside. Guests would be served an intimate gourmet dinner with multiple courses at sunset, accompanied by traditional Chinese music.

The stay would also include learning about the Great Wall’s history and heritage, along with conservation efforts, from some of the monument’s official historians.

However, the 13,000-mile long Great Wall (not to be confused with the Great Firewall) is considered a national treasure. While some parts have been restored to support tourism, many sections are delicate and have suffered damage over the years—understandably, as construction first began on the structure around 221 BC.

One organization that oversees the portion of the Great Wall of China that Airbnb had planned to rent out, the Cultural Affairs Commission of Beijing’s Yanqing district, stated that it did not approve Airbnb’s plans since the event was not in the best interest of maintaining the Great Wall’s heritage.

Buzzfeed News noted that commenters had mixed responses to news of Airbnb’s contest on Chinese social media service Weibo. Some wondered if it was illegal and whether a government department had approved the event. Others felt Chinese citizens were being too conservative and thought it was a fun idea.

Airbnb apparently got enough pushback to cancel the contest, but it still plans to work with hosts and guests in China to highlight the country’s culture and history.