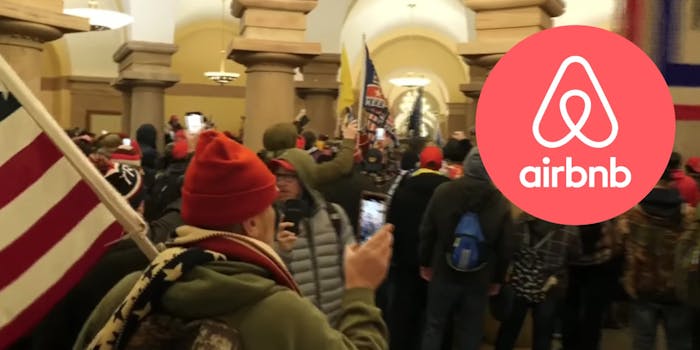 'She and her guests returned after the riot and bragged in front of my house, captured on my Ring doorbell.'

An Airbnb host in the Washington, D.C. area left a scathing review for one of his guests after learning that she had participated in the riot at the Capitol.

Speaking with the Intelligencer, a man going simply by “Paul” explained how he inadvertently rented out his home to a group of insurrectionists.

Paul had first been contacted by a woman named “Melissa” who claimed she needed accommodation for a “history sightseeing trip.”

As the rental date drew closer, Paul began hearing more and more about the planned “Stop the Steal” protest from his neighbors.

Describing himself as a “die-hard Democrat and a supporter of American democracy generally,” Paul argued that even if the woman ended up being a protester that it was not his place to stop her from peacefully assembling.

Yet when the day finally arrived, it wasn’t just Melissa who showed up at the door. Seven other individuals had come to town with Melissa as well.

On Jan. 6, the day of the protest, Paul’s fears were confirmed as he watched the group leave his home and begin heading in the direction of the Capitol with a MAGA flag.

Paul would go on to hear about how supporters of President Donald Trump stormed the Capitol, leaving five deaths in their wake. Paul, who had unsuccessfully attempted to seek aid from Airbnb, began worrying about the group returning.

While watching the feed for the surveillance cameras outside his home, Paul saw one of the guests return with a Miller Lite in hand before uttering over the phone: “We stormed the Capitol, we got inside of it.”

The man went on to defend the Capitol insurrection, Paul said, explaining how the president’s orders to march on the Capitol ultimately led to the chaos that unfolded.

“Trump said we’re gonna march over to the Capitol Building… And we’re going to tell them what’s been happening,” the man said. “To be honest, they deserved it.”

Paul left his home that evening and stayed the night at a friend’s place over concerns for his safety. Airbnb had also closed a support case he had filed during the night. With no help from the company, Paul chose to send his surveillance footage to the FBI.

Upon returning home, Paul stated that other than a lone cigarette near the front door, his guests had been perfect. Had he not overheard them discussing their involvement in the insurrection, he would have given them a five-star review.

But Paul decided on his evening away from home that there was still one thing he could do: Leave a review for Melissa.

“When Melissa booked my Airbnb, she claimed it was for a ‘history sight seeing trip’ but instead she and her guests made history by participating in the most horrific attack on our democracy at the Capitol building on January 6, 2021,” Paul wrote. “She and her guests returned after the riot and bragged in front of my house, captured on my Ring doorbell, ‘I was there… I didn’t want to get involved as much as I did but to be honest they deserved it.’ A Capitol Police officer was murdered and four of the rioters lost their lives. I wouldn’t recommend renting to Melissa.”

Incredibly, it was only then that Paul received a call from Airbnb to inform him that they had removed the review after a request from Melissa. Paul, who had spent hours trying to get ahold of Airbnb previously, did not hold back.

“So I went off on this person saying, ‘How the fuck are you gonna let her rescind her review when I have evidence of this person participating in an attack on the Capitol?’” Paul explained.

In the end, however, Melissa was banned from using Airbnb.

The rental platform has since announced that it will cancel and block any reservations around the time of the inauguration over fears that further violence could unfold.