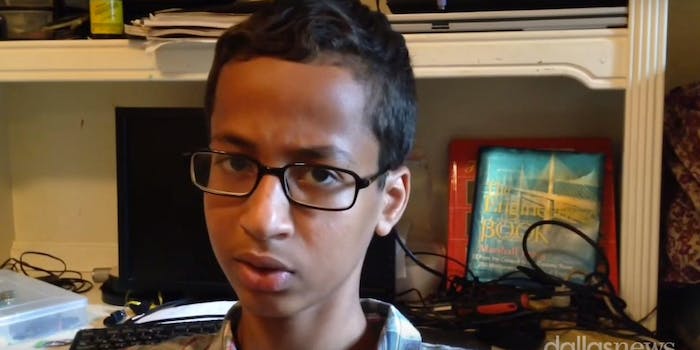 Police say the student never claimed it was a bomb.

A 14-year-old boy was arrested by police in Texas when he brought a homemade clock to class and was accused of creating a “hoax bomb.”

Ahmed Mohamed, a 14-year-old freshman at Irving MacArthur High, was handcuffed and taken to a juvenile detention facility after showing up at school with a science project he intended to show his engineering teacher.

According to Mohamed, an avid inventor, one his teachers took the clock, and he was later pulled out of class by his principal and a police officer, who took him to another room with four police officers where he was interrogated.

One of the officers allegedly remarked: “Yup. That’s who I thought it was.”

I expect they will have more to say tomorrow, but Ahmed's sister asked me to share this photo. A NASA shirt! pic.twitter.com/nR4gt992gB

In an interview with the Dallas Morning News, Mohamed said he felt suddenly conscious of his brown skin and his name, which is one of the most common in the Muslim religion. The officers searched his belongings and his principal threatened to expel him if he didn’t provide a written statement.

Mohamed insisted throughout the questioning that he never attempted to created a “hoax bomb,” and that his invention was nothing more than a homemade clock, a device he’d thrown together the night before using a circuit board and power supply wired to a digital display.

The Irving Police Department did not immediately respond to a request for comment, but told the DMN on Tuesday that they had no information that Mohamed ever claimed the device was a bomb.

“He kept maintaining it was a clock, but there was no broader explanation,” police spokesperson James McLellan said.

McLellan added: “It could reasonably be mistaken as a device if left in a bathroom or under a car. The concern was, what was this thing built for? Do we take him into custody?”

The incident has sparked a wave of support for Mohamed on social media, with unnumbered Facebook and Twitter users sharing messages tagged with #IStandWithAhmed, many of which question whether Islamaphobia influenced school and law enforcement officials into a heavy-handed reaction to the clock.

“Obviously, we believe that had this student not been Muslim you would not have seen this gross overreaction to an ordinary science project by a student,” Ibrahim Hooper, a spokesperson for the Council on American Islamic Relations, told the Daily Dot.

Hooper said CAIR, America’s largest Muslim civil liberties organization, would be following up with school officials and police to determine how to prevent a similar incident from occurring again, and how to repair the student’s reputation.

“Obviously, his name is now all over the media worldwide, and it needs to be cleared. The officials need to step up to the plate and taken responsibility for this overreaction,” he said.

Irving school officials have not commented specifically on the incident, citing privacy concerns, but issued a statement saying it “always asks our students and staff to immediately report if they observe and suspicious items.”

In a letter on Tuesday, the Irving Independent School District asked parents to remind their children to “immediately report any suspicious items” at school. “Please rest assured that we will always take necessary steps to keep our school as safe as possible,” it said.

Update 11:50am, Sept. 16: The American Civil Liberties Union of Texas has issued the following statement.

“Ahmed Mohamed’s avoidable ordeal raises serious concerns about racial profiling and the disciplinary system in Texas schools. Instead of encouraging his curiosity, intellect, and ability, the Irving ISD saw fit to throw handcuffs on a frightened 14 year-old Muslim boy wearing a NASA t-shirt and then remove him from school. We should not deprive our children of liberty when they haven’t broken the law, and we should not suspend them from school when they haven’t broken the rules. The state of Texas in general, and Irving ISD in particular, need to take a long, hard look at their disciplinary policies to ensure that blanket prejudices and the baseless suspicions they engender don’t deprive our students of an educational environment where their talents can thrive.”