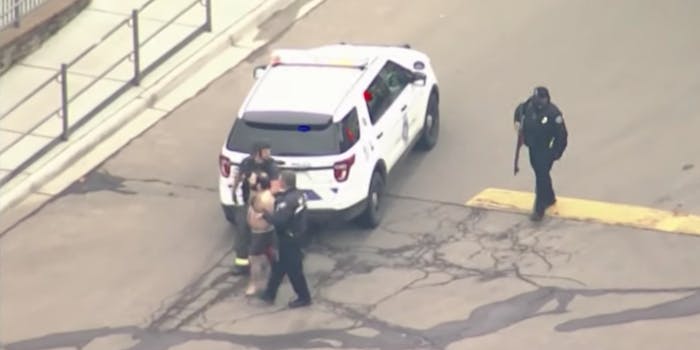 The motive for the mass shooting remains unknown.

Facebook posts from Ahmad Al Aliwi Alissa surfaced online after the 21-year-old Colorado man was accused of carrying out a mass shooting in Boulder on Monday.

Alissa is said to have been armed with a Ruger AR-556 rifle, which he had purchased just one week prior, as well as a handgun and tactical vest.

After surrendering, Alissa, who was injured in the leg during the gunfight with police, spent Monday in the hospital before being booked into the Boulder County Jail on 10 counts of murder the following day.

Investigators have yet to confirm a motive in the attack. However, Alissa’s alleged Facebook page and comments from associates and family are shining new light on the young man’s history.

Alissa’s profile states that he was born in Syria and came to the U.S. at the age of 3. Alissa lived with his family in Arvada, a town roughly 30 miles from the scene of the shooting.

Alissa attended Arvada West High School from 2015 to 2018 and spent his junior and senior years on the wrestling team. Old teammates, according to the Denver Post, described Alissa as short-tempered and violent.

One of those teammates, Dayton Marvel, claimed that Alissa previously threatened to kill his teammates after losing a match during his final year in high school.

“His senior year, during the wrestle-offs to see who makes varsity, he actually lost his match and quit the team and yelled out in the wrestling room that he was, like, going to kill everybody,” Marvel said. “Nobody believed him. We were just all kind of freaked out by it, but nobody did anything about it.”

Another teammate, Angel Hernandez, also told the Denver Post that Alissa got into a fight shortly after when another wrestler poked fun at his loss.

“(The other wrestler) was just teasing him and goes, ‘Maybe if you were a better wrestler, you would have won.’ (Alissa) just lost it. He started punching him,” Hernandez added.

In comments to the Daily Beast, Alissa’s brother, 34-year-old Ali Aliwi Alissa, said that his sibling suffered from “mental illness” and reportedly described him as being paranoid.

“The guy used to get bullied a lot in high school. He was like an outgoing kid, but after he went to high school and got bullied a lot, he started becoming anti-social,” his brother told the outlet.

His brother also recounted incidents when Alissa would allegedly claim that he was “being chased,” watched, or followed.

“He was always talking about (how) people were looking at him and there was no one ever where he was pointing people out,” Hernandez said. “We always thought he was messing around with us or something.”

Marvel, the former wrestling teammate, also said Alissa seemed concerned in high school about being targeted for his religious beliefs.

“He would talk about him being Muslim and how if anybody tried anything, he would file a hate crime and say they were making it up,” Marvel said. “It was a crazy deal. I just know he was a pretty cool kid until something made him mad, and then whatever made him mad, he went over the edge — way too far.”

Alissa’s Facebook page, which has since been removed by the platform, frequently discussed his Islamic faith. In July of 2019, for example, Alissa claimed on Facebook that his phone was being hacked by “racist islamophobic people.”

“Yeah if these racist islamophobic people would stop hacking my phone and let me have a normal life I probably could,” he wrote.

In a post from 2019, Alissa inquired about privacy laws over the belief that his old high school was behind the hacking.

“Anyone know if I can do anything through the law?” he wrote.

In other Facebook posts, Alissa called out what he described as the “industry of Islamophobia” after a white supremacist shooter attacked two New Zealand mosques in March 2019, killing more than 50 people.

In 2015, Alissa also weighed in on the Paris Bataclan attacks, which saw Islamic State jihadists kill more than 130 people, by adding a French flag filter to his profile photo in what appeared to be an act of solidarity with the victims.

Alissa’s brother has insisted that he does not believe the shooting was in any way politically-motivated and instead blamed the carnage on Alissa’s mental state.

“I feel so sorry for the people that were shot by Ahmad,” the brother said. “This was something I would have never expected Ahmad to do. What he did… why, I don’t know.”

Prior to Monday’s shooting, Alissa had several run-ins with the law. Alissa was charged with third-degree assault in 2018 after punching a classmate during his senior year. Alissa was sentenced to two months of probation and 48 hours of community service as a result. Police also pointed to a previous criminal mischief case involving Alissa.

The FBI also confirmed that it was aware of Alissa due to his connection with an unnamed individual under investigation, according to the New York Times.