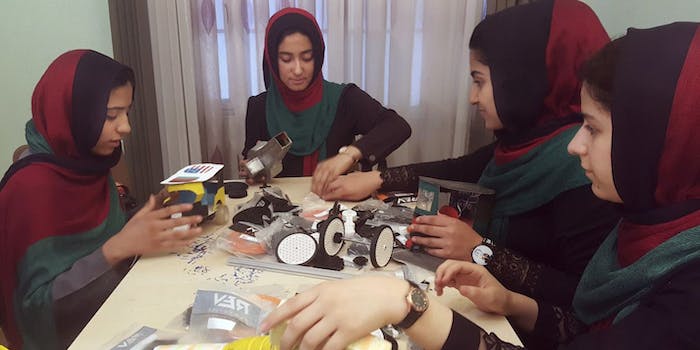 The girls will now compete in D.C.

The decision will let the six-member team and its chaperone attend the FIRST Global Challenge in Washington, D.C., a competition that will bring together teams from more than 160 nations. The girls had previously been denied short-term entry into the United States after they risked traveling 500 miles twice across the war-torn country.

I look forward to welcoming this brilliant team of Afghan girls, and their competitors, to Washington DC next week! #WomenInSTEM https://t.co/01qDduyglS

Word that Team Afghanistan would not be attending the global robotics competition sparked outrage from human rights activists. It also strengthened the argument made by critics that Trump is seeking to ban Muslims from entering the United States. Afghanistan is not one of the Muslim-majority countries listed in Trump’s travel ban.

It appears the president was an integral figure in overturning the previous ban. According to administration officials, Trump was aware of the situation and asked officials at the National Security Council to see if they could make changes. The forum granted the girls “parole,” or a 10-day stay in the United States not under Visa, after contacting the Department of Homeland Security.

“The State Department worked incredibly well with the Department of Homeland Security to ensure that this case was reviewed and handled appropriately,” Dina Powell, Trump’s deputy national security adviser for strategy, said in a statement. “We could not be prouder of this delegation of young women who are also scientists—they represent the best of the Afghan people and embody the promise that their aspirations can be fulfilled. They are future leaders of Afghanistan and strong ambassadors for their country.”

Parole is only used in exceptional circumstances. In this case, it was determined there was a significant public benefit, senior administration officials told Politico.

It still isn’t clear why the girls were rejected in the first place. A spokesperson from the State Department told the Associated Press that “all visa applications are adjudicated on a case-by-case basis in accordance with U.S. law.”

The girls in the Afghanistan robotics team were never going to let their hardships prevent them from entering their ball-sorting robot into the competition next week. A backup plan was created that would let the girls stream from Afghanistan using Skype. That won’t be necessary now. The Washington Post reports the girls have already reached the airport in Kabul on their way to compete in FIRST from July 16-18.