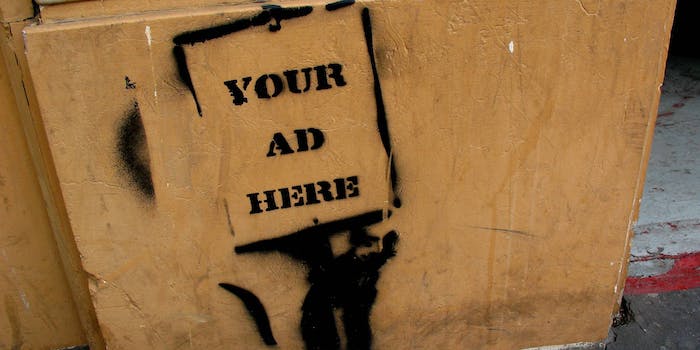 Brace yourself: AdBlock Plus is now selling ads

Is this ironic? Someone check with Alanis Morissette.

On Tuesday, popular ad-blocking software Adblock Plus caused an uproar when it announced that it would be launching an ad marketplace for more “acceptable” advertisements—seemingly running counter to the service’s very concept.

The Acceptable Ads platform, which opened its doors as a beta ad-tech service on Tuesday in partnership with publisher ComboTag, marks an expansion of Adblock Plus’ ongoing effort to make advertisements better—an intiative that dates back to 2011.

Previously, Adblock Plus created a system to whitelist certain advertisements. The approved advertisements would skirt the blocker, which typically removes all ads from a page, if they were deemed to meet certain criteria—including some that have reportedly paid the service to be placed on the whitelist.

Acceptable Ads simplifies the process, supposedly reducing the time it takes to be whitelisted from weeks to seconds. Publishers will then be able to choose from approved ads and place them on their site, knowing that they will appear even to many users who have Adblock Plus enabled.

Publishers will receive 80 percent of all ad revenue generated from ads listed in the Acceptable Ads marketplace. The remaining 20 percent will be split between parties involved with serving the ads. Adblock Plus will keep 6 percent of the total revenue.

The platform puts Adblock Plus in the role of gatekeeper—though it has handed over the reins to an independent review board for its whitelist approval process—and has some questioning whether the company should be in the business of essentially selling ads.

Hey, Adblock Plus now sells ads! So if you'll excuse me, I'm going to go start a minibar catering business for AA meetings.

My face when Adblock Plus starts selling space for ads… #AdblockPlus #ThanksObama pic.twitter.com/BqMBHf4qIT

“It may seem ironic, but it’s not the least bit odd,” Ben Williams, Adblock Plus’ operations and communications director, told the Daily Dot. He presented the platform as an extension of the work Adblock Plus has already done in approving ads, and noted the company has put a fair amount of resources into studying the matter.

“We’ve been running Acceptable Ads for five years now. In that time we’ve done numerous studies, not to mention user feedback, to isolate what is acceptable,” he said.

The current criteria for an acceptable ad prohibits advertisements from disrupting the user’s natural reading flow, requires them to be distinguishable from all other content, and limits their size to no more than 25 percent of the visible page based on placement. Other rules for specific types of advertisements also apply.

Interstitial ads; ads with sound, video, or animation; expanding ads; pop-ups; pop-unders; and pre-roll video ads; among other annoying ad styles are all banned under the guidelines.

Still, some are worried given the fact that Adblock Plus will receive revenue from the ad platform and has previously accepted money from whitelisted advertisers—including, reportedly, companies like Google, Microsoft, and Taboola—may compromise the company’s judgement.

Williams said “only about 10 percent pay for the service of whitelisting,” and that figure won’t change with the new platform.

Users will still have the option to block all advertisements, including ones with the Adblock Plus seal of approval, even with the implementation of the Acceptable Ads platform. They will not be required to see the ads that are whitelisted.

“Users can always adjust their settings however they please, including blocking all the ads and writing their own filters,” Williams explained. “They are, will and have been in complete control,” and said that “will never change.”

Historically, many users haven’t made the decision to block all advertisements. Since launching the whitelist experiment, Williams said only 10 percent of Adblock Plus users opt out of viewing the acceptable ads and choose to block everything.

That figure may change if they start to see more and more advertisements scattered across the web pages they frequent. There are over 100 million users counting on Adblock Plus to filter out the ads that intrude upon and track their actions, but they can surely find alternatives if need be.