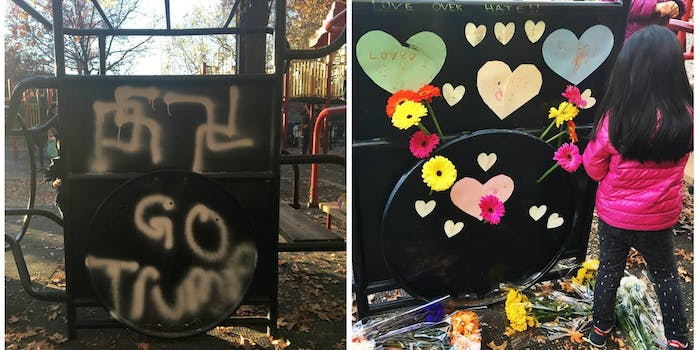 The response to the hate speech was immediate.

A New York playground named after Beastie Boys co-founder Adam Yauch was defaced with poorly-drawn swastikas and a pro-Donald Trump message on Friday.

Here was what parents taking their kids to play at Adam Yauch Park discovered.

Shocking we'd see this in 2016 in a Brooklyn park. Join me & colleagues on Sunday, 11:30 to say: not in Brooklyn, not in NYC, not in America pic.twitter.com/4QI5F6wJKx

According to Vice, the graffiti at the Brooklyn park was discovered by Amy Lazarides, who immediately called the local police, the city, and her state senator, Daniel Squadron. The messages, she said, were quickly removed.

“It took a few seconds to process,” Lazaides told Vice. “It was crazy. A symbol of hate and racism right smack in the middle of the park.”

As a result, Squadron announced a response for Sunday morning when he said the community will “come together to stand against a hate incident.”

Hate has no place in Brooklyn, NYC, or our country. Join me & colleagues Sunday to stand against hate messages. 11:30, Adam Yauch Park, BK pic.twitter.com/BZ95sx9HwF

The park was named after Yauch—who, like the rest of the pioneering rap group, was raised Jewish—following his death in 2013. The remaining members of the Beastie Boys—Adam Horovitz and Michael Diamond—announced they’ll also take part in Sunday’s rally.

Hate has no place in Brooklyn, NYC, or America.
Join us on Sunday to stand against hate messages.
11:30, Adam Yauch Park, Brooklyn, NYC pic.twitter.com/DZXcUyZauP

It’s yet another disturbing act that has become more visible since Trump was elected president and came on the same day Mother Jones reported that the Facebook page of Trump senior adviser Steve Bannon was linked to a Facebook group that features racist and anti-Semitic messages. Earlier this week, KKK recruitment letters were found on cars in Long Island.

And while the hateful messages painted on the playground equipment quickly spread online Saturday, the responding message was already made clear.

Thanks to the families of Brooklyn Heights for showing that love trumps hate (photo by @buttermilk1). And to @NYCParks for fast re-painting. pic.twitter.com/ftQo3dk6bS