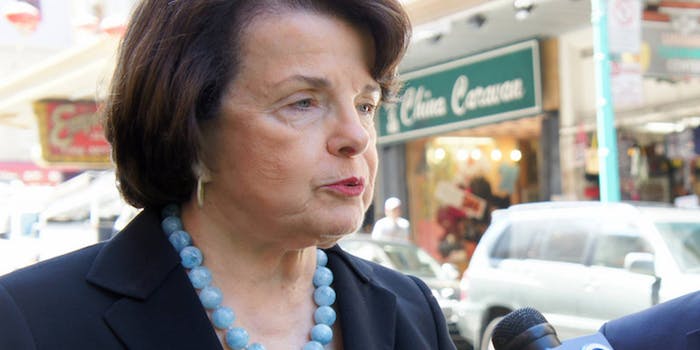 "The FISA Improvements Act does not offer real reform..."

Sen. Dianne Feinstein (D-Calif.) has authored a bill designed to reform the the data-collection practices of the National Security Agency, but her efforts aren’t sitting well with privacy advocates.

In a strongly worded letter released today, 54 civil liberties groups and public interest organizations banded together to oppose the legislation and push members of congress to vote against it.

The letter goes on to charge that the bill does nothing to curtail the NSA’s bulk collection of the call records of millions of American citizens not under any suspicion of having engaged in illegal activity. In fact, they argue that the bill would legalize the agency’s metadata collection program, something the coalition views as currently standing on relatively insecure legal footing.

‟The NSA mass surveillance programs already sweep up data about millions of people daily,” wrote the group, which includes organizations like the Electronic Frontier Foundation, the American Civil Liberties Association, Human Rights Watch and online social news site Reddit. ‟This shadow of surveillance chills freedom of speech, undermines confidence in US Internet companies, and runs afoul of the Constitution.”

The letter comes only a few days after a federal judge released an opinion slamming the NSA’s cell phone metadata collection program as likely being unconstitutional and having done virtually nothing to protect Americans from terror attacks.

In a statement issued on Tuesday, Feinstein said the constitutionality of the NSA’s mass cell phone surveillance program will ultimately have to be decided by the Supreme Court.

Feinstein’s bill would allow the NSA to collect phone records while shrinking the number of officials who could authorize a query into someone’s phone records and mandating the agency release the total number of queries on metadata it made each year. Under the bill, the entire data-gathering system would be reviewed every five years.

Interestingly, as the Verge explains, the bill’s most drastic changes aren’t targeted at the NSA at all. The legislation would establish criminal penalties of up to 10 years in prison for intentional unauthorized access to NSA data.

The FISA Improvements Act is one of two Senate bills aimed at reforming the NSA. The other bill, authored by Sen. Bernie Sanders (I-Vermont) and Rep. James Sensenbrenner, Jr. (R-Wisc.), is far more aggressive. It would prohibit the agency from collecting Americans’ call records and appoint a public advocate to be present during Foreign Intelligence Surveillance Court proceedings.

Sensenbrenner, who was the original author of the PATRIOT Act that legalized many of these surveillance activities in the first place but has since become a fierce NSA critic, has called Feinstein’s bill ‟a joke.”

Feinstein, who chairs the Senate Intelligence Committee, is one of the loudest voices in the Senate in support of the NSA’s increasingly controversial surveillance programs. In a recent USA Today editorial, Feinstein wrote that the agency’s call monitoring programs are, ‟subject to extensive congressional and judicial oversight…The program has been effective in helping to prevent terrorist plots against the U.S. and our allies.”

She has also publicly called NSA whistleblower Edward Snowden’s decision to leak top secret information to the press an ‟act of treason.”

Feinstein’s bill was approved by the Senate Intelligence Committee earlier this year.