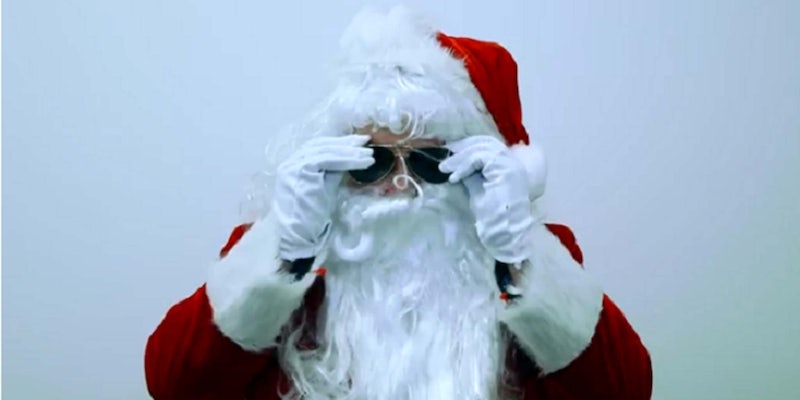 As always, high tech electronics are topping a lot of Christmas wishlists this season. But whether you’re hoping for a new phone, laptop, or tablet this year, the American Civil Liberties Union just wants you to know your new gadget is essentially a battery-powered Big Brother to monitor your every online move.

In a new YouTube video, the ACLU uses the yuletide season to deliver this somewhat buzzkill of a message, reminding us that government domestic spying operations continue unabated even during the holiday season.

The slightly creepy video features a pair of Santa’s, sinisterly clad in aviator sunglasses, following holiday shoppers around on the streets, spying on them with microphones and cameras. All this is going on while the song The NSA is Coming to Town is sung to the tune of Santa Claus is Coming to Town.

“Ah the holiday season,” a narrator says to open the video. “A time for celebration, magic and spending time with the people you love. But don’t forget who’s watching  to make sure you’re not being naughty.”

The video goes on to deliver ham-fisted parody lyrics that make the writers of The 12 Pains of Christmas look like Stephen Sondheim, with lines like “They’re making a list / they‘re checking it twice / they’re watching almost every electronic device.” (Admittedly, these lyrics are worlds better and more germane than Fox News Host Mike Huckabee’s The 12 Days of Obamacare.)

Even if quickly throwing together a Weird Al Yankovic-style Christmas parody seems a little silly, the issue behind it is a serious one. The conversation over domestic spying activities has dominated political discourse throughout 2013. Since National Security Agency leaker Edward Snowden first came forward with his revelations about the extent to which the government collects U.S. citizen’s telecommunications data, citizens and lawmakers have had an ongoing debate over the national security versus the privacy rights.

The issue continues to make headlines regularly. A judge recently declared that telephone metadata collecting may be unconstitutional. There was also a recent meeting between the president and leaders of the tech industry who are demanding reforms to U.S. intelligence gathering.

In this climate, it’s no surprise the ACLU would see the holly, jolly holiday season as an perfect time to remind citizens about the issue at hand.

“We now know that this holiday season, our private communications aren’t as private as we thought,” the group writes. “While we’re calling, texting, emailing, and visiting our friends and loved ones, the NSA is tuning in and collecting massive amounts of data on Americans.”