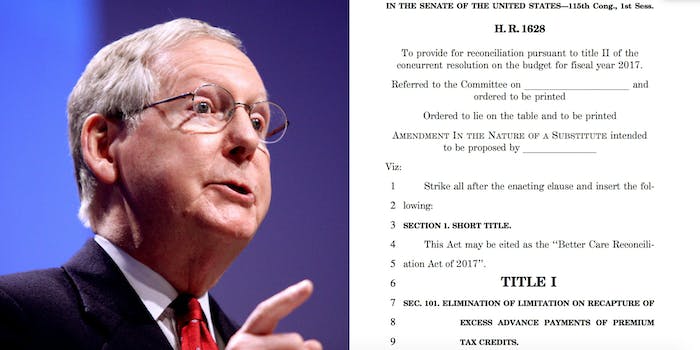 Here’s the full text of the secret Senate healthcare bill

It's finally out from behind closed doors.

Senate Republicans’ secret healthcare bill has finally come out of the shadows.

As expected, the bill in its current form will replace key portions of the Affordable Care Act (ACA, or Obamacare). The changes include large, gradual cuts to Medicaid, the elimination of most taxes put in place by the ACA on wealthy Americans and medical companies, and an end to the so-called “individual mandate” or tax penalties imposed on those who refuse to purchase health insurance.

BCRA faces stiff opposition from Democrats as well as some moderate and conservative Republicans. However, the bill was crafted to be budget neutral, which would allow it to pass by a simple majority vote, meaning it needs the support of at least 50 of the 52 Republican senators.

Read the full bill below: