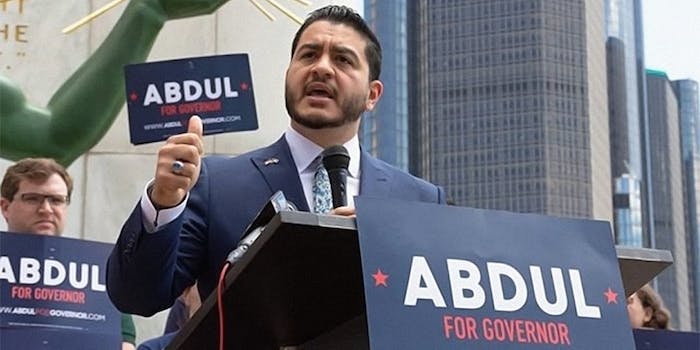 He's the Alexandria Ocasio-Cortez of the Midwest.

When Bernie Sanders and Alexandria Ocasio-Cortez make an endorsement, people listen. These two politicians have become the cornerstone of a growing slate of exciting new left-wing and Democratic Socialist politicians poised to change the face of Democratic politics. This week they threw their support behind one of the most promising progressive candidates in the country: Abdul El-Sayed.

If you walk around Detroit, you would think Abdul El-Sayed has this race in the bag. “Abdul for Governor” signs are behind the counter or in the window in coffee shops and dive bars all over downtown. Like Ocasio-Cortez and Sanders, El-Sayed has captured the progressive imagination in the Michigan governor’s race.

What remains to be seen in the hotly contested Democratic primary—where El-Sayed is squaring off today against establishment Democrat Gretchen Whitmer—is if that grassroots energy can translate into a ticket to the governor’s mansion.

Who is Abdul El-Sayed?

If Abdul El-Sayed wins the Michigan governor’s race, he will become the first Muslim governor in American history, but that is just the beginning of the laundry list of progressive ideals he represents. El-Sayed supports a slate of policies that could radically transform Michigan, shifting money and policy away from corporate interests and towards the people of Michigan.

El-Sayed is only 33 years old, but he already has the kind of background that speaks to the political moment. In 2015, he left academia to make a run at rehabilitating the city’s health department, taking on a role as Detroit’s health director. During his tenure, he launched a program to provide reading glasses to children and an effort to test lead level in water following the events in Flint. He increased the department’s staff from 5 to 200 during his tenure.

Before taking this position, his young life was filled with accolade after another: valedictorian at University of Michigan, Rhodes scholar, doctorate of public health, and a medical degree from Columbia University are just some of his many achievements. The half-Egyptian son of two college professors seemed to excel at everything he put his mind to, whether it was lacrosse or biology. All paths seemed to lead to a career in medical academia until he reached a fork in the road.

It was working in medicine that made El-Sayed realize that there was no use in devoting oneself to a broken system. This revelation prompted him to leave behind his training, and a future in the ivory tower to pursue a career in public health and politics. He told the Detroit Free Press, “I came to appreciate the structure of healthcare is so broken that, as a doctor, it’s hard to fixate on solutions to the problem. So I decided not to do a residency and took a risk by dedicating my life to public health.”

As you might expect, Medicare for All is central to El-Sayed’s campaign message. He wants Michigan to create its own government-run universal healthcare system. Given his extensive medical background, El-Sayed has been able to put together a more comprehensive vision for state-based universal health care than most other candidates. His detailed proposal for “MichCare” has gotten attention of a number of left-leaning publications and is coming to be viewed as a model for state-level healthcare legislation.

El-Sayed supports other so-called “Berniecrat” positions like free public college (in this case, for families who earn less than $150,000) and minimum wage hikes. Like Ocasio-Cortez and Sanders, getting money of politics is high on his list of priorities. El-Sayed refuses to take any PAC money for his campaign.

One reason El-Sayed is breaking through (recent polls have him in a dead heat with his establishment-backed challenger) is that he has tailored the progressive message that is resonating across the country. One of his most inspiring positions is a moratorium on water shutoffs for those behind on bills. The policy that came out of the aftermath of Flint’s water crisis. In his 20-point plan outlining his most important issues, he also highlights opioid addiction and infrastructural improvements.

Who is El-Sayed up against?

El-Sayed is still a bit of a dark horse in his primary contest against state Senate minority leader Gretchen Whitmer, who has secured major political and labor endorsements across the state. Establishment Democrats have lined up behind Whitmer, attempting to paint the far more centrist candidate as a “progressive” in her own right.

In addition to opposition from Whitmer backers like Detroit Mayor Mike Duggan, El-Sayed is also being attacked by the far-right. State Sen. Patrick Colbeck, who is running as a Republican, has used Islamophobic rhetoric in his campaign, going as far to claim that El-Sayed is attempting to start a “civilization jihad” and institute Sharia law in the United States.

Despite this opposition from everyone to his right, and the occasional bigoted attack, El-Sayed who sees a vibrant progressive coalition that could put him over the top in the August 7 Democratic primary and in the general election. Endorsements from national groups like Sanders’ Our Revolution, the Michigan Nurses Association, and Justice Democrats, alongside the support of a variety of local activist organizations, are proof of his grassroots strength.

We will find out on Tuesday if it will be enough to put him over the top, but regardless of the outcome, it is unlikely that we’ve seen the last Abdul El-Sayed.