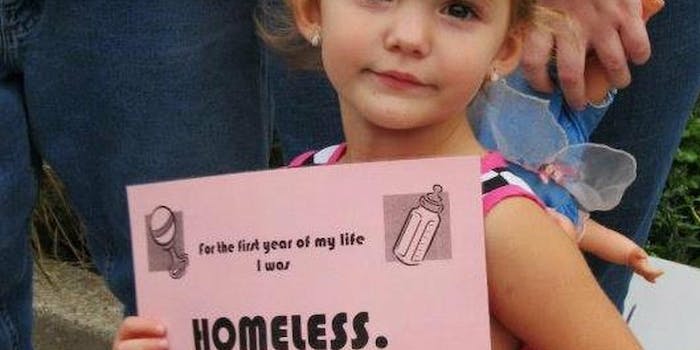 99 Percent creator is passionate about the cause

The Daily Dot speaks to the creator of the 99 Percent blog. He discusses the need for it as well as his critics.

Few sites have had as much influence spreading the Occupy Wall Street movement’s message as the 99 percent Tumblr blog. So it’s little surprise that the blog has come under heavy criticism from mostly right-wing places.

In just two months, the blog, which Chris—who has a regular job in New York and also volunteers to feed the hungry—started while working with OWS, has collected about 19,000 followers and 2,300 photos. These images feature everyone from immigrants to native-born American citizens drowning in debt, facing homelessness, working long hours for terrible pay and “getting nothing while the 1 percent is getting everything.”

There was no grand inspiration for the blog, he told Mother Jones in an interview. It was “just one of those random thoughts you get throughout your day that make you go, ‘Huh, I should write this down.”

Daily Dot: Can you respond to those who believe that the 99 percent people should “take the reigns and get back on the horse” and stop blaming others for their problems?

Chris: I can absolutely understand where they’re coming from: It can be frustrating to see people with problems who won’t take up the solutions that you understand to be the right ones, to see bad choice after bad choice multiply into something uncontrollable. There are people like that out there, who won’t take responsibility for their lives and won’t make a good, honest effort to improve their situation.

But for every one like that, there are 10, 20, 30 who did everything right—who got an education in a field where there is demand, who work hard, who sacrifice, who want nothing more than a hot meal and a warm bed and a doctor to go to when they get sick—and still get nothing to show for it.

These people, I feel, are far more common than some believe, and their opposites are far more rare than some believe. Our culture is one that promises that if you work hard, if you’re diligent, if you improve yourself and your skills, if you really give it your all, you WILL be able to build a life for yourself. More and more people are finding that this does not always happen.

Daily Dot: What do you think of the 53 percent Tumblr blog which was started by RedState?

Chris: All the people who work three jobs to support kids they barely see and never ask for any help and struggle and struggle and struggle, but don’t complain: it is wonderful that you have such a work ethic, because the country needs hard working people like you to kick start the economic recovery. I have known several people who’ve done similar things—who started from nothing and worked hard and made it in America—and I have the utmost admiration for those people. Further, when one does something difficult, you want to honor that struggle and to think that others can’t, genuinely and earnestly can’t, do the same thing that you did can be a challenge to this viewpoint.

Daily Dot: Did you find the NY Times article describing the 99 percent? Did you think it was accurate?

Chris: I think it was statistically accurate, yes. But remember, it’s not just the income and wealth disparities that drove this movement to creation: it’s also  the influence disparities. It’s not the fact that some people have more. It’s the fact that some people with more unjustly influence the system to get even more. It’s the fact that the rules have been written by people who don’t know us, who don’t care about us and probably don’t even LIKE us all that much. And they use these rules to basically get immunity from all consequences.

Citigroup was fined $285 million to settle fraud charges related to their involvement with the financial crisis that made all this mess. This is a paltry sum compared to what the company makes. It will barely even notice this. Where is the accountability in this system? Regrettably, the upper tier wrote it out of the rules. For them, at least. Everyone else who lose their homes in dodgy mortgage schemes? They should have made smarter choices, apparently.

Daily Dot: Not only has the blog featured posts from everyday Americans, it looks like posts from Chinese and Hispanic immigrants have shown up on the site. What was it like to read these stories considering the blog is mostly dominated by white people? What does this say about the 99 percent movement?

Chris: The stories themselves were heartbreaking and really bring home, I feel, how difficult it can be to be an immigrant in America: more than anyone else, they know how crushing the current system can be. They, and others like them, are some of the most hardworking people I see. They work long hours at back breaking jobs for little pay and few rights, and this is after taking an extremely risky journey across the ocean just to be a part of the American dream, to capture some of the prosperity that they are told exists in this country. It speaks very strongly to the kind of image that America has, and it brings into the sharpest of relief how this country has failed to uphold that image.

Photo from We are the 99 Percent blog.