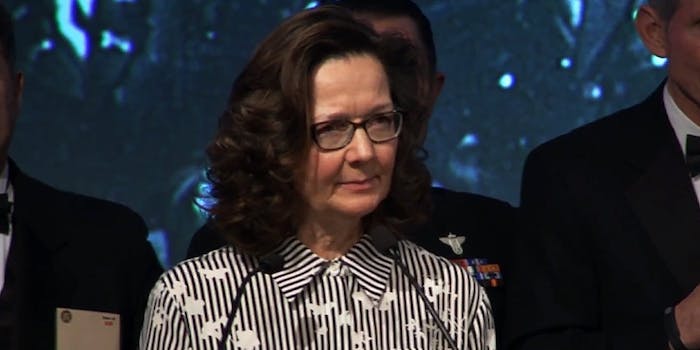 The al-Qaeda leader wants to present information to lawmakers.

Khalid Sheikh Mohammed, the notorious al-Qaeda leader behind the 9/11 terror attacks, claims he has dirt on President Donald Trump’s CIA pick Gina Haspel, and he wants to share it with the Senate Intelligence Committee in a move that is, in fact, boosting the nominee’s popularity.

Mohammed, who was captured in 2003, planned attacks that killed more than 3,000 Americans on September 11, 2001. In the weeks following his capture, he was waterboarded 183 times, underwent rectal examinations, and was slammed against a wall during interrogations by CIA operatives.

Now, reports the New York Times, Mohammed is seeking the permission of a military judge at Guantanamo Bay to share “six paragraphs of information” on Haspel with senators.

For Donald Trump, Jr., however, the Islamic militant’s loathing for Haspel and his desire to weigh in on her hearing—in a bid to undermine her nomination—only represents another reason why she is suited to the role of leading the CIA.

“Now I really want her in there,” he tweeted.

9-11 terrorist attack mastermind Khalid Sheikh Mohammed opposes Gina Haspel’s nomination to lead the CIA… which tells you everything you need to know.

Now I really want her in there.

The president announced Haspel’s nomination in March. Ever since, her role in operating a CIA black site in 2002, particularly in overseeing the agency’s controversial torture and enhanced interrogation program, has been the focus of much moral scrutiny.

During her three-hour nomination hearing on Wednesday, Haspel refused to say that the program had been immoral but did insist that she had always conducted herself “honorably and in accordance with U.S. law.”

As far as Trump is concerned, Haspel is a patriotic agent who followed orders in a war on terror. On Monday, he slammed those that opposed her nomination on the basis of her affiliation with the program.

My highly respected nominee for CIA Director, Gina Haspel, has come under fire because she was too tough on Terrorists. Think of that, in these very dangerous times, we have the most qualified person, a woman, who Democrats want OUT because she is too tough on terror. Win Gina!

Other Twitter users, on news of Mohammed’s aim, criticized Democrats who are hesitant in their support for Haspel as having aligned with the terror mastermind’s position.

People want me to get upset that Gina Haspel may have overseen 'enhanced interrogation' techniques of scumbags like Khalid Sheikh Mohammed.

I watched as my neighbors jumped 90+ floors to their death rather than get cooked.

The stakes in this vote are clear: are you with KSM or Gina Haspel? https://t.co/lcjgAm7q9X

The Democrats who oppose Ms. Haspel for CIA Director will align themselves w/this despicable man, KSM, who masterminded 911 & beheaded WSJ reporter, Daniel Pearl. He doesn't want her confirmed either according to the WP!! Why R Dems always on the side of those who hate the USA? pic.twitter.com/QEIH9k7aDE

This is the man who’s peeps cut off Perlman’s head!

Republican Leah Vukmir, the midterm election challenger to Wisconsin’s Sen. Tammy Baldwin, even suggested that in not backing Haspel, her Democratic rival would rather give terrorists “hugs and safe spaces.”

Senator Baldwin would rather give the man behind the 9/11 attacks and other terrorists hugs and safe spaces than take adequate action to protect America and confirm Gina Haspel quickly. Unacceptable. #wisen https://t.co/njYuI94GHA pic.twitter.com/sCTCDpIvZs

It is uncertain whether Mohammed, currently fighting the death penalty, had ever been interrogated under Haspel’s authority. But his defense lawyers claim that the information he had on her “was important.” It is also unknown what the information might reveal—if anything—and it’s not assured that the military judge will even grant his request.