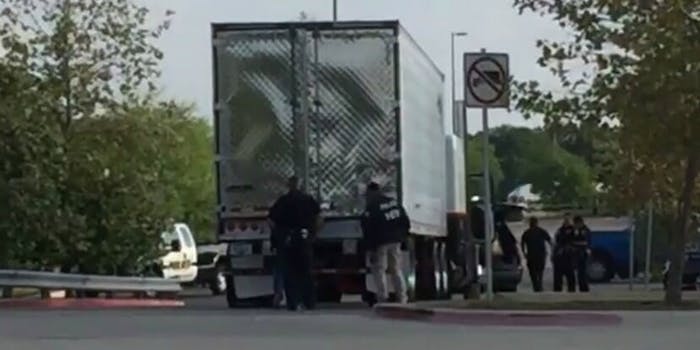 Temperatures reached as high as 101 degrees on Saturday.

Eight people were found dead in the back of a tractor trailer truck early Sunday morning outside a Walmart in San Antonio, and the chief of police called it a human trafficking crime.

Police were alerted to the truck a little after midnight on Sunday. Somebody from the truck asked a Walmart employee for water, and after bringing the water, that employee called the authorities. When police arrived, they found the dead bodies and dozens of other people inside the truck, many of whom were taken to the hospital.

The truck’s air-conditioning reportedly wasn’t working, and temperatures in San Antonio reached as high as 101 degrees on Saturday. According to the New York Times, the eight men who perished were believed to have died from heat exposure and asphyxiation. San Antonio Fire Chief Charles Hood told reporters that there were 38 people in the back of the tractor trailer, including two as young as 15 years old, and described the passengers as “very hot to the touch.”

“[Seventeen] patients were transported [to the hospital] priority 1 (life threatening injury/illness) and 13 were transported priority 2 (not immediately life threatening),” the San Antonio Fire Department said in a statement. “Air ambulances (AirLife), and the SAFD Ambus (mobile mass casualty transportation vehicle) were also both utilized to transport the multitude of patients we encountered. A search of the surrounding area was also conducted to attempt to locate any patients that may have attempted to flee the scene.”

Breaking 2:28am – SAFD confirms multiple bodies found inside a trailer parked outside a Walmart in SW San Antonio. @KENS5 pic.twitter.com/Av8JviQt9f

First hearse just arrived on scene in SW San Antonio where 8 bodies were found inside a trailer. @KENS5 pic.twitter.com/rLrVQFUfyr

Walmart truck gets inspected by investigators

Authorities from Homeland Security and Immigration Customs Enforcement are involved in the investigation.

The driver of the truck has not been identified, but San Antonio police took him into custody and he could face state and federal charges.

“[This] is not an isolated incident,” Police Chief William McManus said. “This happens quite frequently … fortunately there are people who survived, but this happens all the time.”

Update 3:06pm CT: According to the Associated Press, two people who were being treated at a hospital have died, raising the death toll to 10.

According to Thomas Homan, the acting director of U.S. Immigration and Customs Enforcement, there might have been as many as 100 people in the trailer, many of whom might have fled the scene. Homan also said four of the passengers are thought to be between 10 and 17 years old.