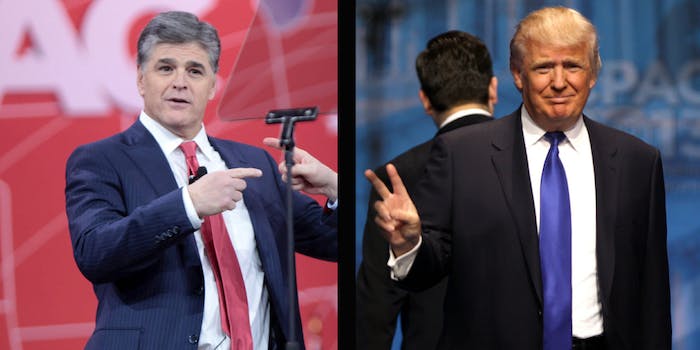 During the interview, the president spoke about immigration, North Korea, “fake news,” and Trump’s tax reform plan, among a slew of other topics.

Here’s are a few of the more wild comments made during the interview:

1) Hannity goads crowd into voting for Trump in 2020

When discussing coal jobs and jobs in the energy sector, Trump said he “likes” Pennsylvania because he went to college in the state, but Hannity quickly interrupted him–reminding him that he won the state during the 2016 election.

“You also won Pennsylvania, right?” Hannity said, before addressing the crowd. “Is he going to win Pennsylvania in 2020 too?”

2) Trump doubles down on ‘fake news’

“Media is bad, they are really dishonest people. These are very, very dishonest people in many cases,” he said. “When you’re the one being written about, you know if it’s good or bad—and it’s always, they try and make it negative. So the media—I call it fake media. It is fake. So much fake news.”

Hannity asked the crowd if they agreed, eliciting a large cheer.

3) Trump is confused by a military song

In the middle of the interview, the loudspeakers in the hangar began playing “Retreat,” which signals the beginning and end of a day.

Trump seemed confused by the sound.

“Are they playing that for you or for me?” Trump asked, before answering his own question by praising Hannity: “They’re playing that in honor of his ratings. Did you see how good his ratings? He’s beating everybody.”

Hannity replied that he thinks his ratings will be higher due to the president being interviewed.

While discussing the GDP, the president said they were “really rocking” and hoped to see continued growth in the future. However, he thought one issue might slow growth in this quarter.

“But we got hit with a few hurricanes, as you’ve probably heard, that will have, I assume, an impact,” he said.

Hannity asked Trump how he would help “minorities” who need protection after bringing up the violence in Chicago. Trump said that “minorities want police protection more than anybody,” and completely glided past the reason for much of the frustration people of color have with the police for disproportionately shooting unarmed people in their community.

Trump said the violence in some parts of the country, like Chicago, is because “incredible” police are unable to do their jobs.

He did not specify how the police were not able to do their job.

In an attempt to both criticized former President Barack Obama’s time in office and pat himself on the back, Trump mangled an explanation about how the national debt works by linking it to rises in the stock market.

Trump to Hannity tonight. This is … not how it works. pic.twitter.com/Odwc6cGcyO

7) Trump responds to his ‘calm before the storm” remarks

Hannity asked the president about the tensions between the United States and North Korea, saying that at some point things were going to “come to a head.”

Trump took the toss-up question and ran with it.