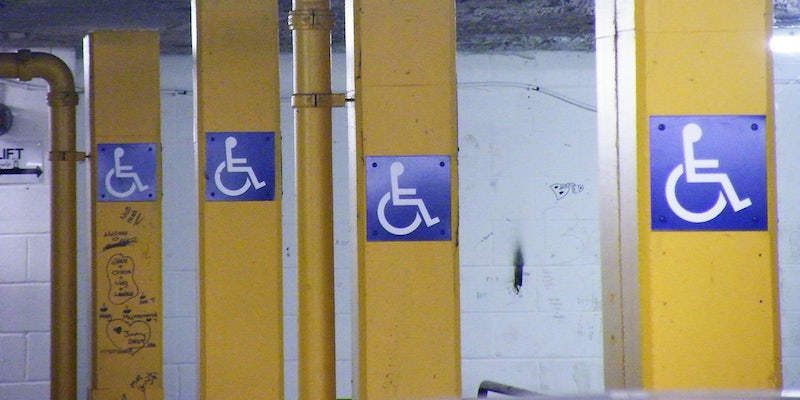 The 7 disability issues everyone needs to know about

You may not have realized how these issues affect your fellow Americans.

Disability rights are about more than awkward looks, ramps, and accessible parking. While these are daily issues for many, there are also major issues of policy, civil rights, and even life and limb that most non-disabled people haven’t even heard of.

Most people have no personal reason to know about these issues. But anyone who cares about social justice should be aware of them. Each involves fundamental questions of life, death, equal opportunity, and the fight against prejudice. Most importantly, each of these disability issues are solvable.

If you want to understand disability from a social justice perspective, here are seven issues you should know something about.

Social Security Disability will run out of money sometime next year unless Congress votes to transfer money from the retirement fund into the disability fund. It has been done before, without much partisan fuss. It may happen again, maybe at the last minute—but will it happen in time to prevent drastic income loss for people who absolutely can’t afford it?

The problem is that Republicans in Congress see this as an opportunity to reduce entitlements. To further this goal, they have begun playing up the popular perception that the disability community is full of lazy malingerers with made-up or trivial conditions. It is true that the number of Americans collecting disability has risen recently, largely because of the recession (many disabled people who used to work lost their jobs), and the aging workforce, which naturally leads to a higher incidence of disability. Like any program, disability has room for improvement, but it isn’t broken or full of fraud.

2) A double standard for murder

Keli Stapleton tried to kill her daughter Issy because, she said,  she couldn’t deal with her autistic daughter’s behavior anymore. She received considerable sympathy in the media, part of a systematic pattern—in cases where parents murder or attempt to kill their disabled children, they are typically described as put-upon victims, while their children’s identity and personhood fades into the background.

It may not be quite an epidemic, but it is a disturbing pattern, a double standard that puts disabled people at risk. “We should write victim-centered narratives, not killer-centered narratives,” writes freelance journalist and blogger David Perry. Disability activists aren’t looking for condemnation or revenge, but rather for these cases to be reported properly, the way other murders are reported. “The media rhetoric explains away the violence by making disability itself the culprit,” Perry writes. The presence of disability shouldn’t reverse the roles of victim and victimizer.

Parallel with police killings of black men in Ferguson, Mo., Staten Island, N.Y., and too many other places, an awareness has grown of another disturbing pattern: police killing disabled people, many of whom are also people of color, due to woeful ignorance about how to interact with disabled citizens, especially in confrontations.

Deaf people often don’t respond as expected to verbal commands. Physically disabled people sometimes look or sound intoxicated. Autistic people can be extra sensitive to touch, noise, and direct confrontation. And police are often quick to assume that anyone who seems “mentally ill” is dangerous. As was in the case of Ethan Saylor, a Maryland man with Down Syndrome tacked and asphyxiated to death by mall security guards when he wouldn’t leave a movie theater, the common denominator is escalation instead of conciliation. Vastly uneven or non-existent police training on interacting with disabled citizens is a key contributor to such tragedies.

The debate over legalization of assisted suicide looks on the surface like a clash between “pro-life” religious fundamentalists and secular progressives. Disabled people have a different perspective on the issue that doesn’t fit neatly into either category, and it is rarely heard. While the right to choose the time and manner of one’s death may seem a like a civil right, especially for those who are terminally ill, many see making suicide legal due to medical conditions as terrible public policy.

Disability rights advocates argue that legalization leads to emotional and economic pressure for severely disabled people to “choose” suicide. People consider assisted suicide mainly out of depression, which can be treated, and because they lack support and good palliative care. In short, they say, we can do better for terminally ill and disabled people than just allowing them to kill themselves.

People with severe physical or cognitive disabilities sometimes need help with everyday tasks like cooking, cleaning, dressing, bathing, and even using the toilet. In the past, you could only get this kind of long-term care in nursing homes or large institutions—highly regulated, hospital-like facilities cut off from the community. Today, most people who need these services prefer to get them in their own homes, in the form of visiting home care aides. For disabled people, this is about basic freedom and the right to choose an integrated life of possibilities or else be forced to live a restricted, regulated life waiting around for something to happen.

Unfortunately, people who need long term care can’t always choose where they get it. Many are still forced by regulations, state budgets, and program design into nursing homes, when they could do just as well or better at home.

In 2000, 81.3 percent of Medicaid long term care funding went to nursing home fees, and only 18.7 percent went for community-based care. In 2012, the ratio was 61.2 percent nursing homes, 38.8 percent community care. That’s a real improvement, but the ratio is still heavily favors more expensive institutional care that almost nobody actually prefers.

Medicaid long-term care rules vary from state to state, and it’s worth noting that while paying for nursing home care is mandatory under Medicaid, home care is still an optional service for states. There is a strong “institutional bias” in long term care, even though advocacy and legal supports like the Americans with Disabilities Act (ADA) and the Olmstead Supreme Court decision—which provided a mandate for community-based care—are slowly changing the balance.

In 2014, employment of people with disabilities rose 10.8 percent. That would be cause for celebration, except that this is an improvement from a staggeringly low employment figure to begin with. This January, only 26.7 percent of working-age disabled people had jobs, compared to 71.2 percent of non-disabled people.

Along with discrimination, one of the problems most often cited by disabled people is that they find themselves trapped in poverty and unwilling idleness because earning more money at a job risks losing vital benefits due to asset caps means that, if you ever really “got ahead” by working, you would lose Social Security, Medicaid, or Medicare benefits eligibility, making you worse off than before. The recently passed ABLE Act may improve the situation, but it won’t apply to everyone, and it’s not clear how much of an effect it will have on work “disincentives.”

It’s hard to improve employment rates for disabled people if their education is substandard or lacking meaningful credentials. Unfortunately, the education picture for disabled students in the United States is mixed.

Two of the most important measures of progress are mainstream inclusion and final outcomes. In the 2011-2012 school year, 80.9 percent of disabled students receiving special education spent 40 percent or more of each day in “regular” classrooms along with non-disabled peers, while the rest spent more or all of their time in segregated, sometimes isolated classes with only other disabled students. This is much more integration than was typical a few decades ago, but rates vary from state to state, and many disabled kids still spend most of their times in self-contained classes, separated from their non-disabled peers.

Disabled students face a rather different set of barriers in higher education, where accommodations and support services are designed to be more student-initiated, and faculty tend to claim more freedom to stick to their guns on their particular views of accommodating disability.

Outcomes are also better than some might expect, but still fall significantly short. Nationally, 80 percent of public high school students earned a diploma on time during the 2011-2012 school year.” Only 61 percent of disabled students earned a diploma that year. The rest of these disabled students either left school with a non-diploma certificate that doesn’t count as a diploma for most purposes, dropped out of school, or “aged out” at 21, when the right to free public education ends.

Correction: A previous version of this article incorrectly identified Ethan Saylor’s home state. He was from Maryland.

Photo via kate hiscock/Flickr (CC BY 2.0)