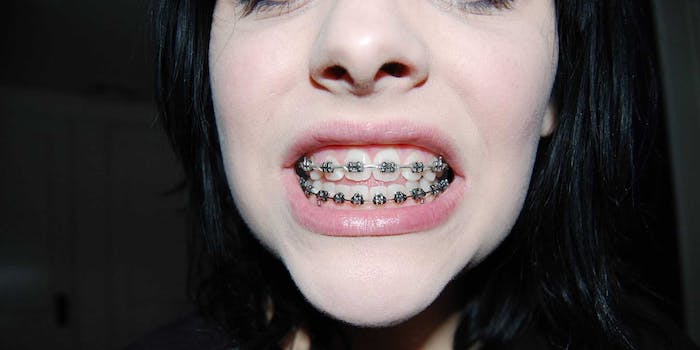 Most people hide their smile when their teeth are strapped with braces, but one college kid is smiling widely to show off his teeth—and the 3D printed braces he made to straighten them.

Amos Dudley, a 23-year-old digital design student at the New Jersey Institute of Technology, sported braces during his junior high years like many American teenagers. But years later, after neglecting upkeep on the orthodontic procedure, Dudley’s teeth had started to return to a crooked state.

“I wasn’t smiling, and it was because I was unhappy with my teeth,” he wrote in a blog post. As an undergraduate student with the cost of school and living already burdening him, he didn’t have the money to pay for a treatment that costs, on average, about $5,000.

But what he did have was access to expensive digital fabrication equipment and the technical knowhow to put it to work.

After noticing that Invisalign—a popular brand of clear aligners that act as an alternative to metal braces—bare a striking resemblance to layer striations from 3D printing, Dudley decided to tackle his predicament in a way that would save him money and showcase his design capabilities.

“I hoped this project would raise awareness about me as a designer, and get people to think about the disruptive potential of do-it-yourself technology,” Dudley told the Daily Dot. “For that, and a good chance of fixing my teeth, it was worth the risk for me.”

The risk factor is not to be ignored, but Dudley’s project has been a considerable success. 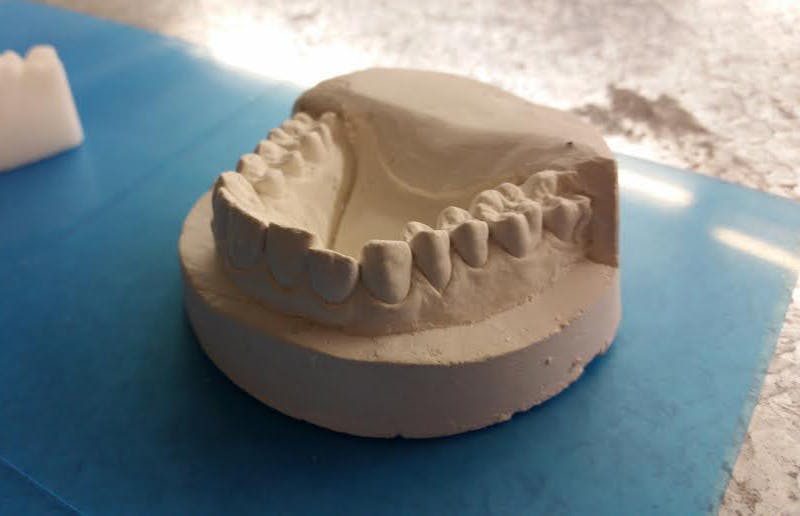 After creating a mold of his mouth using a yogurt container and casting compound called Permastone, Dudley smoothed out the model using razor blade. What he was left with was a functioning model of teeth that could be used with a 3D laser scanner.

After turning the physical mold into a digital model, Dudley was able to animate the teeth and move them into their correct positions. Once he had created on screen the smile that he wanted in real life, he just had to create the braces to guide the teeth into place.

Using orthodontics textbooks as his reference point, Dudley figured out the maximum amount of movement a tooth could make per aligner. He turned each frame of the animation process into its own wearable element that would shift his mouth toward his goal. 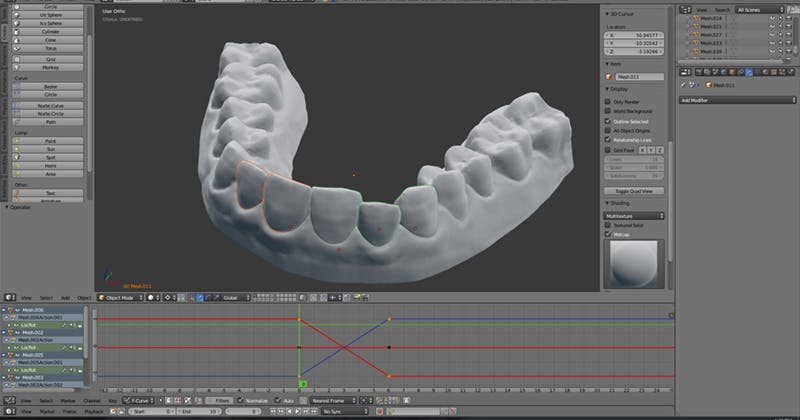 After some cuts with an X-Acto knife and sanding down of the edges, the braces were ready to be worn. After 16 weeks of wearing the braces day and night, removing them only to eat, and Dudley has the smile that he had modeled for himself nearly four months ago. Not bad for a project that Dudley invested just $60 into for materials.

Now that he knows how to do the process himself, he intends to follow through by fabricating his own retainers that will be worn at night to help maintain the proper alignment.

He should be able to sleep easy during those evenings as well; Dudley said he’s heard from a number of orthodontists since posting about his project, “most of whom have been impressed by how close I got to replicating commercial orthodontic aligners.” 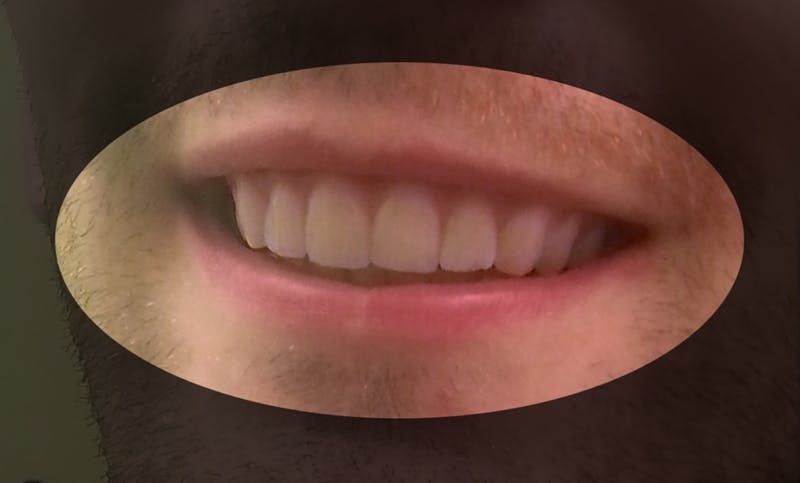 In the comments on his blog, he’s received a significant amount of praise from users—many of who claim to be medical professionals or DIY dabblers themselves.

“This is awesome!” one wrote, though the commenter, posting under the username ok87, noted that Dudley’s case is a rare one.

“You have a tooth with a small conical root and it’s the only tooth you’re trying to move, and not particularly far,” ok87 wrote. “You fit the mold for this self-experiment… but it certainly would not work for everyone. Invisalign is a niche product for those with problems just like yours.”

Dudley admitted as much himself when discussing the project and response to it. “A lot of people are taking away from this project that it’s a simple task to make your own braces (or that I’ll do it for them),” he said. “This isn’t the case, and attempting to do so without adequate knowledge can be quite dangerous. I should have communicated this better.” 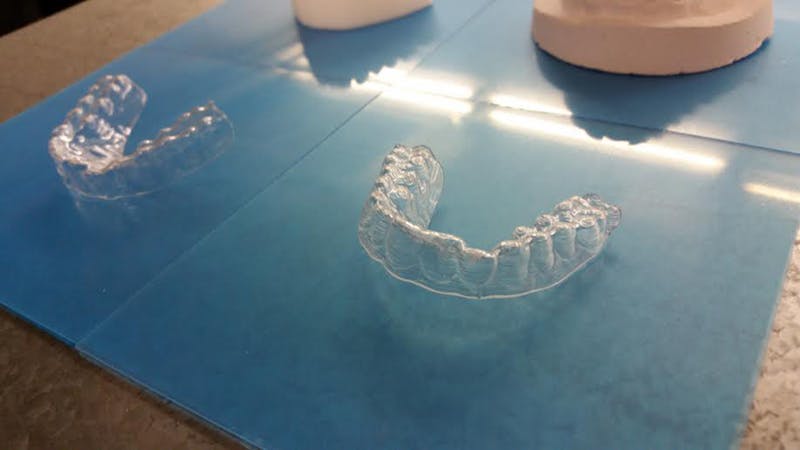 There are plenty of comments calling for Dudley to commercialize his process; modeling teeth and printing braces for those who can’t afford the costs associated with going to a professional orthodontist.

“I won’t be making retainers/aligners for people (even if you offer money). I’ve thought about the possibility, and decided it’s not a good idea for a large number of reasons,” Dudley commented on his blog in response to the swell of support for a DIY dentistry practice.

Though he’s opting not to mess around with the mouths of other people, Dudley does see a considerable amount of potential for medical practice given what he was able to do on his own. He noted that 3D printing is “already used in the industry, including the commercial Invisalign process,” but has largely been out of reach for smaller businesses.

“The hardware is expensive, and the entire process requires a robust system of 3D scanning and software-driven alignment that’s only recently been offered at a small scale,” he said.

Dudley himself was able to keep his cost down primarily because of his access to the necessary machinery through his school. Without that access, his costs would be considerably higher than the $60 he wound up spending, and taking the business commercial would require pricey equipment that would raise the cost beyond just material for anyone hoping to buy the DIY braces.

Still, Dudley noted that a shift is beginning to take place in the orthodontic practice. He pointed to SmileCareClub, a company that connects clients remotely to orthodontists and dentists across the United States who can plan treatments and offer services at a considerable discount. “I think this will put some competitive pressure on the industry to lower costs,” he said.

For those hoping to recreate Dudley’s success, here’s a simple suggestion: don’t. Dudley acknowledges that, despite his situation being the perfect storm both in terms of knowledge, access, and necessary treatment, it was still a risk to try without any background in orthodontics.

“It’s worth mentioning that clear aligners are mostly used for minor corrective treatment (like mine, where a patient’s teeth relapse after they don’t wear their retainer), rather than more complex care,” he said, and explained that some professionals have “expressed concern about potential harm to the invisible part of the teeth, such as the roots, which can only be monitored by X-Ray.”

There are more severe cases that require wire braces, and attempting to undertake that process on one’s own can lead to permanent damage that no amount of science and steel can set back in place.

The DIY braces trend gained steam over the last few years, with a community cropping up online for people who want to attempt the risky process. The issue became so prominent that the American Association of Orthodontists issued a consumer alert about the dangers of the practice in hopes of getting people to stop ruining their mouths.

An often-cited study—notably sponsored by Invisalign—suggests in an over-the-top fashion that having misaligned teeth is just about the worst thing that can happen to a person. “Crooked Teeth = Dull Social Life,” it stated, while “Straight Teeth = Success.”

It backed the claims with statistics that show 38 percent of people would consider not going on a second date with someone who has misaligned teeth, while 58 percent saw people with straight teeth as more likely to be successful and rich. People with a nice smile were also more likely to be seen as smart, happy, and healthy than those with less-than-perfect teeth.

The survey may read like a farce, but it does offer one piece of insight that likely rings true: most people (except for maybe J. Cole) would like to have a nice smile. Knowing that, it’s no surprise that people would go to just about any lengths to achieve that, even when the cost of the professionally done procedure makes it unaccessible.

What Dudley was able to achieve shouldn’t be held up for amateurs as an example of what they can do with a little ingenuity; he still had the technical understanding of process, just from the perspective of a designer rather than an orthodontist. Attempting to replicate his success without knowhow in either could be disastrous.