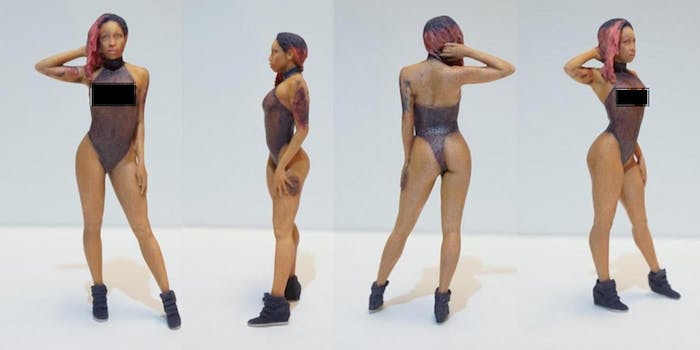 Wanna meet a lady over the holidays, but not interested in someone that talks, or moves, or has the ability to convert oxygen into carbon dioxide? Also, would you prefer it if she were four-to-10 inches tall? The 3D-printing company CoKreeate has your back! It just came out with a pocket-sized, 3D-printed model of Milloux, a model who works for the adult website Suicide Girls.

A model for the alt-porn site Suicide Girls since 2008, Milloux first came across CoKreeate on Instagram, immediately identifying it as a potential marketing opportunity. While she told 3DPrint.com she’d seen 3D scanning tech used to make vinyl collectibles at ComicCon, “never had I seen a full 3D scan of a person.” So she contacted CoKreeate to produce a miniature figurine of herself.

Basically, here’s how it works: The company uses a high-tech, hand-held 3D scanner to take frame-by-frame images of the subject, who’s asked to stand in and hold a variety of poses for about 10 minutes. The scans are processed and edited, and then printed out using a full-color 3D printer. The whole process takes about two to four weeks. Since commissioning her 3D scan, Milloux hopes to autograph and distribute them to her fans as a collectible action figure. CoKreeate co-founder Will Co says he sees people outside the adult entertainment industry using that service for similar purposes, telling 3DPrint, “Everyone wants to be their own action figure, but not everyone has the cash to mass produce it.”

Pretty soon, we’ll likely be able to bypass the embarrassment of placing an order online for a 3D-printed sex toy and make them ourselves: Experts predict that 3D printers will soon become so accessible and affordable that people will be able to use the technology in their own homes.