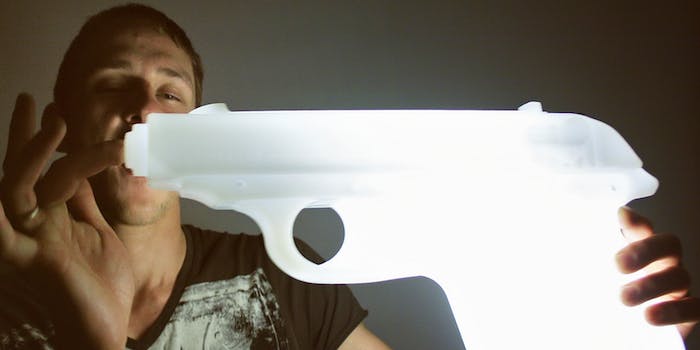 And Congress can't agree on what to do.

On Dec. 9, the law that bans the sale of undetectable 3-D-printed weapons is set to expire. And Congress has yet to act.

Earlier this year, the first 3-D-printed plastic handgun, known as the Liberator, was successfully designed and fired. Though the weapon is a rare success and currently accessible only to those with access to costly 3-D printers, authorities fear others like it will soon be readily available to anyone looking to skirt metal detectors.

The law used to ban such weapons, known as the Undetectable Firearms Act, was originally passed in 1988 and has since been renewed on two separate occasions. Essentially, the law prohibits any person from possessing, distributing, or manufacturing a firearm that is undetectable by “walk through metal detectors.”

3-D-printed weapons are picked up by body scanners, but as the New York Times pointed out, the scans are unpopular and the equipment is expensive.

The hold-up in Congress is that some lawmakers want to further amend the ban in order to more explicitly address the growing concern over printed weapons. And certainly, the law is far from perfect. RIght now, all gun manufacturers have to do to comply is insert a non-functioning piece of metal into their weapons. The Times described such additions as “nonfunctional and easily removable.”

The National Rifle Association didn’t respond to the Times’ request for comment. Perhaps even the organization understands the wisdom in restricting the distribution of undetectable plastic weapons.

Of course, ultimately, the battle will not be won by renewing or modifying the law alone. Those intent on sneaking a weapon onto an airplane or into a public building will no doubt find a way to get ahold of and modify plastic weapons accordingly. To truly thwart them, authorities will need to come up with an efficient way to detect the firearms.

“The law is not the story,” former FBI official Tim Murphy told the Times. “It may stop large-scale production, but won’t stop the lone wolf or adversary. Someone needs to be thinking bigger.”