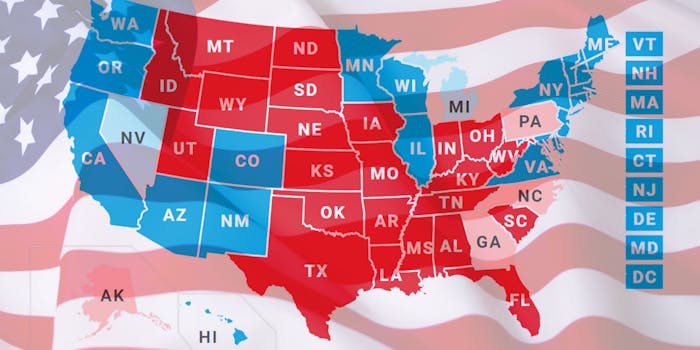 Here’s when to expect the remaining states to be called

With no winner declared in the 2020 election, the country’s collective eyes are focused on a handful of states that will decide who will become the next president.

The increase of mail-in ballots because of the coronavirus pandemic threw a wrench into the immediate election night results as some states scramble to finish counting votes. Georgia, North Carolina, Pennsylvania, Michigan, and Nevada have yet to be officially called by multiple sources. Other states like Wisconsin and Arizona have been called by outlets, but are still close.

As of election night, President Donald Trump led over former Vice President Joe Biden in several of those states in what experts are calling a “red mirage.”

Many of the above states had yet to count a number of their mail-in votes as of last night. However, as these last battle ground states get down to their final votes, the margin between the two candidates tightened.

As of publication, Biden holds 238 Electoral College votes while Trump maintains 213 according to the Associated Press. These last few states will put one candidate at or above the necessary 270 votes to win.

Here is everything you need to know about when the remaining election results will go live.

Currently, Georgia election officials have 93% of the vote accounted for, according to the New York Times.

Trump leads in the southern state with 50.3% of the vote compared to Biden’s 48.5%, as reported by the same Times numbers.

Late Wednesday morning, Fulton County election officials said final results for the state will hopefully be available by 9 p.m. eastern on Wednesday, according to Channel 2 in Atlanta.

However, the county has previously stated that final absentee counts could extend to 5 p.m. on Friday.

The New York Times is also reporting that 95% of the vote is reported in North Carolina.

The state announced that the election results will be in by Wednesday at 8:15 p.m. eastern, according to the Washington Post. The delay was a result of some polling locations extending their voting hours as they opened late on Tuesday.

However, North Carolina will continue to accept mail-in ballots until Nov. 12, as approved by a judge last week.

Pennsylvania has the least amount of votes accounted for with 80% of the vote reported. This is another state leaning Trump with Biden trailing by around eight percentage points.

State officials have said they expect most of the votes to be counted in Pennsylvania by Friday, according to the New York Times.

Secretary of State Kathy Boockvar said “the overwhelming majority” of votes will be seen on Friday, according to the Philadelphia Inquirer. No specific time was given.

Similar to North Carolina, a judge approved for absentee ballots in Pennsylvania to be counted up to three days after election day.

The New York Times has 94% of Michigan’s election results reported with the state heading into blue territory. Biden has 49.6% of the vote over Trump’s 48.7% at time of publication.

“Michigan’s Secretary of State Jocelyn Benson says on CNN there are 100s of thousands of absentee ballots still being counted, including Detroit, Flint, Grand Rapids, Warren, Sterling Heights. She says they’re on track to have ‘a much more complete picture’ by the end of the day,” CNN reporter Betsy Klein tweeted.

Biden leads Trump by 44,916 votes as of Wednesday afternoon.

Wisconsin is likely the closest race the country watches right now. The New York Times reports that over 98% of the vote is counted with Biden winning by less than 1%.

On Wednesday, CNN and the Associated Press projected that Biden won Wisconsin.

Earlier on Wednesday, a tweet by election official Chris Jackson said the Election Commission Administrator called the race for Biden.

“BREAKING Wisconsin Elections Commission Administrator says on @NBCNews: ‘All of the ballots have been counted.’ Joe Biden has won Wisconsin by 20,697 votes,” Jackson tweeted.

NPR confirmed that Election Commission Administrator Meagan Wolfe said that there were no more votes to count in Wisconsin. But, the state is currently verifying the results.

The Trump campaign has said they want a recount.

Around 600,000 ballots still needed counting this morning according to AZ Central. A spokeswoman for the Elections Department, Megan Gilbertson, said between 160,000 and 180,000 were designated mail-in ballots.

Two updates on the state’s results come at 7 p.m. and 10:30 p.m. pacific on Wednesday, Gilbertson said.

However, Fox News and the Associated Press have called Arizona for Biden already.

Similar to Arizona, Nevada only has 86% of the vote reported. And the state is leaning blue with Biden holding on by less than 1%. Numbers are likely to change as the state counts more votes.

The next election results update won’t come until Thursday at noon. But, final results may fluctuate for the next week as the state is counting mail-in votes until Nov. 12.

It means the election won’t like end today or tomorrow.