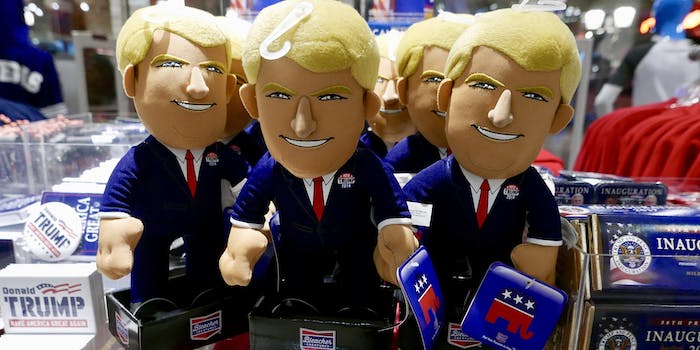 Your quick guide to Trump’s inauguration

President-elect Donald Trump will soon be inaugurated as the 45th president of the United States. And you can guarantee the world will be watching.

While Trump’s swearing-in will take place on Friday, the ceremonial festivities start the day before and will continue into the weekend—if you count what’s expected to be a historic protest, that is.

No matter where you stand on the political spectrum or the incoming Trump administration, this is one event you’ll likely be talking about for years to come. Here’s everything you need to know to be part of the action, even if you aren’t in Washington, D.C.

What happens on Thursday, Jan. 19?

The first of the inauguration events kicks off at 10:35am ET on Thursday at the Lincoln Memorial. The all “Voices of the People” concert includes performances by the D.C. Fire Department Emerald Society Pipes and Drums, high school marching bands, choirs, and more. You can watch the concert live here:

From 3:30 to 4pm ET, Trump and Vice President-elect Mike Pence will perform the traditional wreath-laying ceremony at the Arlington National Cemetery. Trump will then head to the Lincoln Memorial to deliver his first remarks of the inauguration events at the “Make America Great Again! Welcome Celebration,” which runs from 4pm to 6pm ET. Three Doors Down and Toby Keith will headline the event. You can watch the MAGA! rally live here:

What will happen at Trump’s inauguration?

The inauguration ceremony itself begins at 11:30am ET on Friday at the U.S. Capitol. Sen. Roy Blunt (R-Mo.) will begin the ceremony with a call to order. Readings and invocations will follow from a variety of different faith leaders, including Archbishop of New York Timothy Michael Cardinal Dolan, Reverend Dr. Samuel Rodriguez of the National Hispanic Christian Leadership Conference, and Pastor Paula White of New Destiny Christian Center.

Notably absent from Trump’s inauguration are representatives from the Hindu or Muslim faiths, which Obama had at his prior inaugurations.

We will hear music from the Missouri State University chorale. Pence will then take the vice-presidential oath of office, to be administered by Supreme Court Justice Clarence Thomas.

Trump will then take the presidential oath of office, to be administered by Chief Justice John Roberts. He will then give his inaugural address.

We will then hear readings and the benediction by Rabbi Marvin Hier, Dean and Founder of the Simon Wiesenthal Center; Reverend Franklin Graham of Samaritan’s Purse and the Billy Graham Evangelistic Association; and Bishop Wayne T. Jackson of Great Faith Ministries International.

Singer Jackie Evancho will then finish with the National Anthem.

At approximately 3pm ET, the inauguration parade will begin. Trump and Pence will take part in the parade down Pennsylvania Avenue from the Capitol to the White House. It’s unknown whether Trump will stop at his hotel, also located on Pennsylvania Avenue. The two will be leading a procession of over 8,000 parade participants, including veterans and active members of the military, high school and college bands, police, motorcycle and cavalry units, and the Girl Scouts and Boy Scouts of America, among others.

How many people will attend inauguration?

The estimates vary from 700,000 to around 900,000, and officials are not expecting Trump’s inauguration to hit the 1.8 million mark of Obama’s 2009 inauguration. Hotel rooms in the D.C. area are still available and tickets to the swearing-in ceremony are still up for grabs on D.C.’s Craigslist. Just over 100 bars in D.C. registered for extended hours this weekend, compared to 280 in 2009.

Trump and soon-to-be First Lady Melania Trump will attend three inaugural galas, compared to the 10 attended by the Obamas in 2009.

What about the anti-Trump protests?

Several pro-Trump and anti-Trump groups have scheduled rallies and protests on Friday, including Bikers for Trump, whose members have vowed to form a “wall of meat” to block anti-Trump protesters from disrupting the transition of power. Bikers for Trump are one of around two dozen groups that applied for demonstration permits for the inauguration.

The Women’s March on Washington will be on Saturday and is expected to draw at least 200,000 people. Washington Metropolitan Transportation Authority, which runs D.C.’s Metro system, has even expanded its service for the march.

How can I watch the inauguration?

YouTube’s news hub has partnered with seven media organizations to provide constant coverage of the inauguration. YouTube will also offer 360-degree video and 4K video streams, bringing you closer to all of the action. You can choose which channel you want to follow along with or jump back and forth: