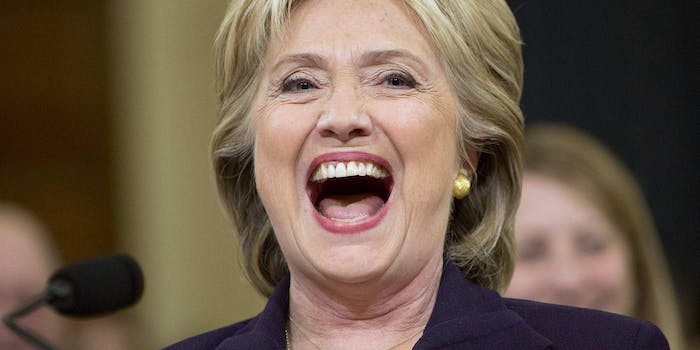 Talk about a close call.

Clinton’s win comes as a result of challenger Sen. Bernie Sanders—who trailed Clinton by just 1,531 votes out of more than 600,000—conceding the race to the former secretary of state.

The Missouri vote was part of “Mega Tuesday,” when five states (along with the U.S. territory of the Northern Mariana Islands) all held primary contests.

Following the unexpected upset victory of the Sanders campaign in the Michigan primary one week ago, there were questions about whether the independent Vermont senator would be able to maintain that momentum.

The data journalists at FiveThrityEight looked at the relatively small number of polls conducted in the state leading up to tonight’s match-up and gave Clinton a 54 percent chance of winning over the independent Vermont senator. Those odds have narrowed considerably in recent days with the former first lady previously leading her rival, by FiveThirtyEight’s analysis, with odds of victory at 81 percent.

However, according to an analysis conducted by the data marketing firm iQuanti, Sanders had maintained a consistent lead over Clinton in terms of online search volume within the state since at least last July. In February, people in Missouri were searching for Sanders at more that twice the rate they searched for Clinton.

Clinton now has a 1,606 pledged delegates and superdelegates over Sanders’s 851. The majority of that gap (467) is comprised of Clinton-backing superdelegates—party officials empowered to back whomever they want rather than ordinary delegates, who are put into the corner of one candidate or another based on the decision of primary voters in a given state.

Missouri awards its 71 delegates proportionally, meaning both candidates will receive delegates relative to their share of the overall vote.

Democrats require 2,383 delegates for a candidate to secure the nomination.