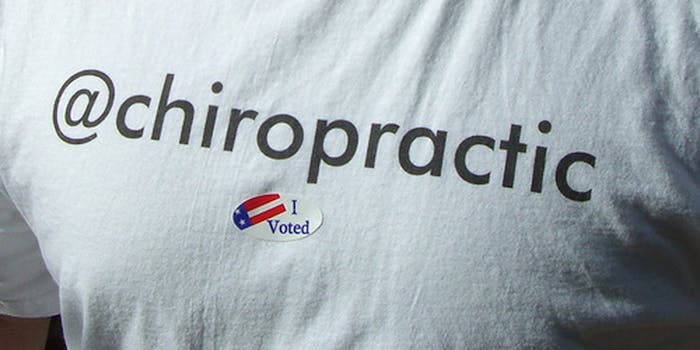 But we should still hold hope that Web communities can connect voters directly to candidates.

According to a recent study from the Pew Research Center, he might want to rephrase that.

While Beltway insiders are transfixed by the latest tweets, only 1 in 20 Americans turn even occasionally for information about the campaigns to the microblogging service Costolo touts.

The numbers aren’t much better for Facebook: 6 percent turn to the social network regularly for political news, with another 14 percent using it sometimes.

For someone who collects a paycheck by writing about the intersection of politics and social media, this is a big concern.

But the real reason may be that this election just isn’t that gripping for my generation—the people most likely to get their news via social media.

2008 was the most exciting election in years, with dramatic contests for both parties’ nominations. There as, and also a visceral sense of excitement that the Internet might finally be reshaping politics. There was a dramatic drop in the percentage of people aged 18 to 29 who got their political news online, from 42 percent in 2008 to 29 percent in 2012.

That demographic is hardly a heavy watcher of cable news, the other big source of political coverage. So the numbers suggest that the people who might otherwise be getting status updates on their candidates online have just logged off from this year’s election. The defeat of the Stop Online Piracy Act was more compelling news for the Facebook generation than Newt Gingrich’s victory in South Carolina, Pew noted.

Even so, the Internet is still the only medium that saw any growth from 2008 to 2012. Print and television—especially local stations and the broadcast networks—saw major declines in use. In 2000, 9 percent of people turned to the Internet. Two elections later, that number had jumped to 24 percent. This year, the Internet crept up to 25 percent, besting local newspapers as a source of political news.

When you move beyond the medium and look directly at the source, though, the Internet’s growth has yet to lift social media into the big leagues. People prefer the online arms of news brands like CNN, Yahoo, Fox News, and MSNBC.

So why are Twitter and Facebook putting so much time into courting politicians and journalists to include them as outlets? For one, it’s still early in the race and we haven’t even gotten to the general election, at which point more people will become interested, not just politicos.

But there’s also a good reason for those numbers to start ticking upwards: Facebook and Twitter can be an outlet for pure, unfiltered political news. People can share all the articles they’re reading on CNN and Yahoo, but they can also interact with candidates and other voters directly. These sites give space to create a dialog between voters and candidates like none before.

I see social media as bringing back an era when candidates walked among voters, without bulletproof barriers and black SUVs.

Just look at last week’s Google+ hangout when Barack Obama talked to a handful of voters screen to screen—which is how we do face to face these days anyway.

You can look at that as tools for bypassing media filters—or creating far more interesting stories for reporters to cover. I’ll vote for the latter. Will 2012 be the Twitter election? We’ve got a long way to go before the numbers reflect that hope. But I’d rather have the glorious chaos of hashtags and @ replies than the stilted rituals of TV-driven politics.