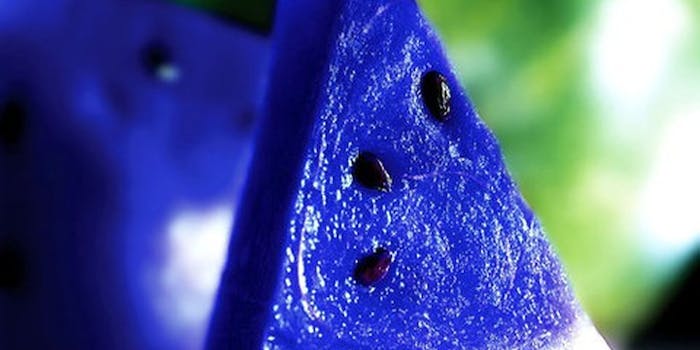 Is it real or is it Photoshop?

While it can be tempting to see the site as one big window-shopping experience, not everything pinned can be bought. Some pins are simply too good to be true.

MORE:
The most popular fruit that doesn’t actually exist

Horticulturalist Steve Asbell has devoted a collaborative pinboard to pointing out the fakes, flora-related and otherwise—Fake Plants and Other Hoaxes.

The Daily Dot picked the 10 most-surprising finds from his board:

According to its caption on Pinterest, “This fruit grows in some parts of Japan, and is known for its vibrant blue color. What you probably don’t know about this fruit is that it can switch flavors after you eat it. Everything sour will taste sweet, everything salty will taste bitter, and it gives water a strong orange-like taste.”

It’d be cool if it were true. Asbell says it’s just a watermelon slice altered to look blue or purple. It looks like something out of Alien—a fully formed foot against the wall of a pregnant belly. Luckily, it’s just Photoshop.

“Use your common sense people,” Asbell wrote. “The uterus and all the layers of muscle, fat, and skin are too thick for the details of a tiny foot to show up. This is not real.” This bright bird has been going around Pinterest as an almost-extinct Chinese species. But as Asbell points out, it’s just a colored-in photo of your average barred owl. Pinners are claiming this adorable creature is an endangered baby fennec hare born at Korea’s Pyongyang People’s Zoo. But it’s not endangered. It’s extinct—or rather, it never existed in the first place.

“It is just as it looks—a Photoshop kitten/bunny combo,” Asbell said. “An April fools day hoax, based on how cute baby Fennec foxes are!” So let me get this straight: You eat these foods, and you actually lose calories? Sorry dieters, that is not going to happen. Check out that trunk! How long do you suppose it takes a tree to grow that big? Not very long, it turns out, when it’s a sculpted piece of a Disney theme park.

“It has been described as a mystical tree in India, but having been to Animal Kingdom,” Asbell added. “I know better…” There’s only so much you can achieve with food coloring. If you injected yellow lemons with food dye, they’d develop a colored tinge, but their rinds wouldn’t go technicolor. This photo purports to be a picture of an Irish castle in a suspiciously tropical-looking Dublin. According to Asbell’s board however, that’s a German castle transposed onto Thailand’s James Bond Island. Here’s your proof. Yes, it’s possible to create (slightly less vivid) rainbow roses with food coloring. But Asbell highly, highly doubts that you’d ever see one growing in the wild, as this one is depicted. Pareidolia sometimes causes people to think our burnt toast looks like Jesus or for trees to look like people. But this tree’s resemblance is too close for coincidence. It’s fake.