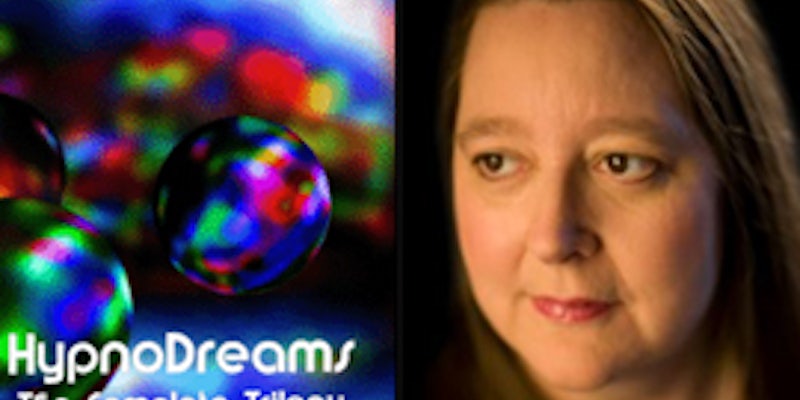 Silvia Hartmann claims to have discovered the sixth sense.

It’s a technique she’s explained on one of her several websites devoted to self-help pursuits like wealth creation, emotional freedom techniques, totality hypnosis, and energy psychology.

But this isn’t her only notable find: Hartmann has clearly discovered how to put the Internet to work for her. Her latest project, “The Naked Writer,” allows readers to watch in real time as Hartmann writes a fantasy novel before their eyes.

“There are too many people accessing this file right now,” Google Docs tells me when I peek at Hartmann’s doc. And no wonder; after a profile in The Guardian and Hartmann’s claim to be creating an Internet first, people are piling in to see if there’s a revolutionary story behind the revolutionary writing technique.

The project is a fantasy called The Dragon Lords, though of course, like any novel, the title could change along with other parts of the book. Chapter One opens with a nod to the project’s baring-it-all metaphor:

“It was not every day that Mrs Delhany found a naked man in the driveway.”

At her notes in the end of the doc, Hartmann explains that she writes “in bursts when I feel like it.” She writes extremely quickly; with two writing sessions since this morning, she’s up to 12 chapters and 2 parts. This rapidity creates stream-of-consciousness, as she doesn’t appear to pause for major edits as she writes, and instead lets her thoughts flow:

She did not like the ambulance men touching him; she noted that she felt proprietory [sic]. She did realise however that these feelings were usual for her. She could never pass a stray dog by, or a stray cat, or any kind of bad luck story.

She owned a dog with three legs.

The story so far involves the heroine’s rescue of a strange man out of time named Rix. Rix isn’t the only one who’s naked, metaphorically speaking: the Google Doc reveals a writer who’s naturally making things up as she goes along, with some sections reading more like an outline of ideas than a narrative. Take the beginning of Chapter 8:

Some facts about Rix.

Sandra’s ancient, bedraggled tom cat who hated everyone came into the lounge that night and lay under Rix’s chair. It was heard to purr when this had never been known to happen before, not in 14 years of that cat’s life.

Rix spoke English very well but did not seem to be able to read English.

He had unusually fast reflexes. Whilst washing up, Sandra had dropped a glass. Rix had caught it one inch off the ground before it could shatter on the flag stone floor and had crossed half the kitchen in order to do so.

The unfinished quality of Hartmann’s first draft is no surprise, considering how rapidly she’s writing; but it also reflects Hartmann’s commitment to honest personal development. Under the name “Starfield Ltd,” Hartmann controls between 50 and 100 self-help domains, including the publishing house that has published all of Hartmann’s books. Many of these sites declare Hartmann to be a bestselling expert in topics like Emotional Freedom Technique and “meridian tapping.” She espouses the healing of animals through “intention.” And her frequent use of the title “Dr” for herself comes from her claiming to have received “a doctorate in ENERGY” from the Universal Life Church.

Hartmann claims to be doing something no writer has done before, though in practice, it is little different from an author of fanfiction or original fiction posting a WIP (work in progress). In fact, a large part of the appeal of fanfic kink memes is the ability to generate fiction spontaneously, with many fics written on the spot while others await the next comment in a thread. Additionally, many authors have invited audiences to tell them what to write next, such as Homestuck’s Andrew Hussie did in his earlier MS Paint Adventures.

But will thousands of readers “audiencing” Hartmann’s series lead to more sales or less? Hartmann doesn’t seem to be worried. She has numerous free publications on her websites. After a playful practice run last night, in which she wrote a short story for an audience, fans had only good things to say.

And if her tale, about a man without a hat, is a thinly veiled metaphor for Hartmann’s own iconoclastic worldview, well, whether or not she is on the path to homeopathic healing powers or the sixth sense, she could well be the path to telling a good story.