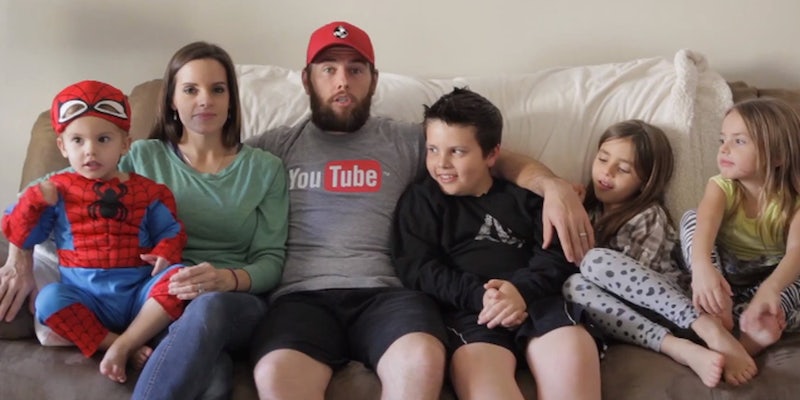 The film will document the vlogging experience through the eyes of YouTube star ShayCarl and his family, "the Shaytards."

The first family of YouTube is about to get their moment in the spotlight.

The Shaytards—consisting of vlogger ShayCarl (real name Shay Carl Butler), his wife Colette, and their four children—have been posting daily videos about their lives for the past four years, but now they’re about to be the main subjects of a vlogger documentary.

They successfully raised $202,389 in order to make I’m Vlogging Here, a 90-minute documentary with Maker Studios (of which ShayCarl is a co-founder) and ApprenticeEh, Tubefilter reported.

ShayCarl wants to tell his story as well as give the audience an inside look at other YouTubers including PrankVsPrank, CTFxC, the Vlogbrothers, and CharlieIsSoCoolLike.

“This documentary will delve into what vlogging is, the rise of YouTube creators, and how vlogging has forever changed the lives of the vloggers, the viewers, and the industry itself,” ShayCarl wrote on the Indiegogo fundraiser page. “We want to tell the story of how being a ‘YouTuber’ has changed the lives of thousands through the eyes of one family that has realized a dream come true of a dream they never knew they even had.”

Over the course of a six-month production schedule, the Shaytards will film I’m Vlogging Here in 12 different cities located throughout the U.S., Canada, and the U.K. Eventually, ShayCarl wants to put the documentary on YouTube for free.

The Shaytards have encouraged viewers to upload video responses explaining how vloggers have affected their lives and noted that some of the responses could make it into the documentary.

“This is a documentary about vloggers,” ShayCarl said, “and we want as many YouTube vloggers to be in this documentary as we can get!”

The Shaytards initially asked for $250,000 from viewers in order to make their documentary, but they immediately received backlash from fans, who found it unfair that ShayCarl was asking for such a large amount of money despite being a founder of Maker Studios—a top YouTube network that recently scored $40 million in funding from Time Warner—and running five popular YouTube channels.

“I could never bring myself to ask my audience for their money,” Johnson wrote on his Facebook page. “Also, I always figured the day would come when someone’s campaign would backfire on them.”

The Shaytards dropped their campaign goal to $180,000 by removing the cost of a tour from the funding, choosing to focus mainly on the documentary.

There’s no release date for I‘m Vlogging Here, but the Shaytards are bound to announce it on their channel.