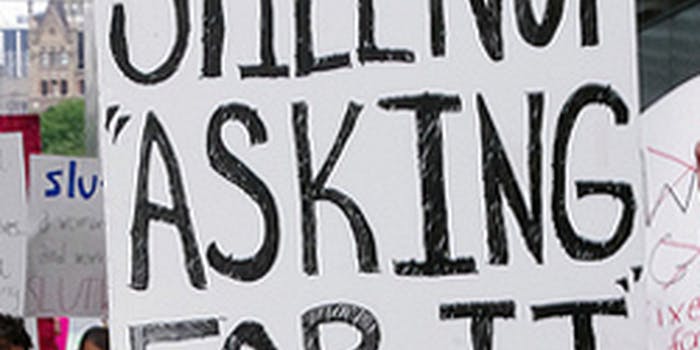 The Reddit community's supportive reaction to an anonymous confession of sexual assault has been widely criticized elsewhere on the Internet.

Note: Trigger warning for frank discussion of sexual assault in this story and in all links.

Reddit has seen several discussions about sexual assault, including threads where victims have shared their painful personal experiences. But perpetrators are just as willing to share—for better or worse.

Reddit user Nachington called on Reddit users to talk about their experiences raping people.  “Reddit’s had a few threads about sexual assault victims,” he asked, “but are there any redditors from the other side of the story? What were your motivations? Do you regret it?”

Users shied away from the directness of Nachington’s question, instead describing people they knew who had been convicted or accused of rape. “He’s hardworking and he has a great job, and I almost never think of him as that guy, that guy who was a monster,” one user wrote. Other users revealed stories of boundary confusion and behavior they didn’t realize was wrong until later. Discussion was largely sympathetic.

And then it came. “Throwaway, and not a story of backing out like the others in this thread,” the commenter wrote; then he described his experiences as a serial rapist.

“I wanted the thrill of the chase, and that’s what led me to forcing myself on girls.”

The user, who created the username serial_rapist_thread for the purposes of contributing to the discussion, was extremely detailed: Descriptions of methods he used to target girls read more like an instruction manual than a guilty confession. “Alcohol helped,” he informed readers. “Having a few drinks during the movie, or doing a few jello shots that were ‘prepared for a party that weekend’ would usually do the trick.”

Though many commenters reacted with horror and disgust, many others expressed gratitude. “I cannot pretend that your story did not deeply frighten and disturb me, but I am grateful that you shared… if only to offer some women a glimpse into the type of predator they ought to watch out for,” one wrote. Still others congratulated him for his honesty and expressed even more sympathy. One user, responding to a suggestion that the rapist should confess his actions to his wife, commented, “[H]e ‘should’ do something that has a fair chance of ruining the life he’s put together, a life where he harms no one…? Silly. Let the past be passed.”

Backlash was fierce. Even the goons of SomethingAwful, a community that’s not known for handling controversial topics with sensitivity, were aghast.

Twitter user @karnythia took to the #rapeculture tag to vent her frustration. “#rapeculture is a serial rapist being congratulated for his “honesty” when he admits his crimes,” she fumed in a series of tweets. “#rapeculture is thinking his story is a good educational tool for other users.”

Ironically, just three days before the Reddit thread, The Nation’s Jessica Valente wrote “How to Out a Rapist,” in response to a 17-year-old girl being charged with contempt of court for tweeting the names of her assailants. (After public outcry, charges were dropped.)

“Rape survivors know that there’s a world of shame and stigma that awaits them should they speak up,” Valente wrote.

The Reddit thread seemed to illustrate the idea that, as Valente put it, “rapists’ reputations are more important than a victim’s right to speak up.”

Editor’s note: A previous version of this article contained an unintentionally ambiguous phrase and has been corrected.