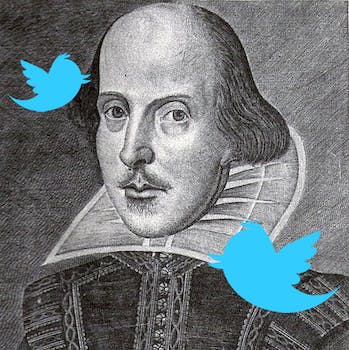 Twitter’s making poetry, and users don’t even realize it.

Every day, consciously or not, millions of tweets are written in iambic pentameter—Shakespeare’s metrical rhythm of choice. But since these tweets are few and far between, Twitter has yet to read like a sonnet.

Now artist Ranjit Bhatnagar has devised a program to seek out those tweets and bring them together in rhyming couplets. It’s called Pentametron, and it’s crowdsourcing Twitter’s unintentional poetry:

“We’re gonna rock around the clock tonight.”
“My momma better have her pockets right !”
“I’m starting to become a Bynum fan”
“carmelo playing like a leader man”

“Pentametron uses the stress patterns to decide if a tweet is in iambic pentameter, and it uses the pronunciation to match up rhymes,” Bhatnagar told the Daily Dot.

Bhatnagar is no stranger to the unconscious poetry of everyday life. Previous endeavors found this Brooklyn artist building collaborative sonnets as a 1992 experiment and later as a 2009 project for the Brooklyn Museum. His personal Web page Moonmilk, which has been around since 1993, showcases dozens of projects centered around community, poetry, and music.

The artist created Penametron in just 10 hours of work. The program scans “400 to 500 tweets every second” to identify and retweet rhyming iambic pentameter couplets.

“If it doesn’t find a rhyme, it just keeps running until one turns up,” Bhatnagar explained. “On average, it throws away about 20 lines of pentameter before it finds a rhyming pair, which means it digs through a few million tweets to make one rhyming couplet.”

As a result, Pentametron participants aren’t even aware they’re part of the project until they’ve been retweeted. Bhatnagar said that out of thousands, only three or four have seemed “confused or mildly annoyed.” Instead, most onlookers have been captivated by the project.

“I think people appreciate that it’s an absurd project, but interesting in the way it scavenges for ‘poetry,’” Bhatnagar said.

For his own part, Bhatnagar said he’s satisfied with the project’s results and plans to keep it running as long as possible.

“At first, I just wanted to see if it was possible. It was,” he said. “Now I’m happy to watch the texts stream by like a sort of fancy schmancy collective unconscious of Twitter.”