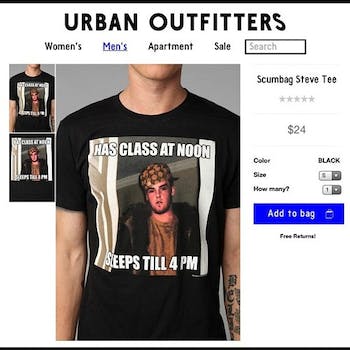 Blake Boston is the world’s most famous scumbag—but don’t feel bad for him. With a new Scumbag Steve shirt appearing at Urban Outfitters, he’s certainly making the best of it.

Boston, 22, is the face of the popular Scumbag Steve meme: his face, topped with backwards designer cap and nestled in fur, has been the background for many slogans poking fun at obnoxious behavior.

But instead of distancing himself from his perceived douchebag persona, Boston has embraced it—and the money is coming in. Currently, in the form of one men’s sized cotton shirt in small to extra-large.

“I love you all who have my back and think I should sue urban outfitters but NO, THEY ARE DOING THIS FOR ME,” he wrote on Tumblr. “Digging them so much for this!!!”

The aspiring rapper told fans on Twitter and Tumblr that he sold his likeness to Urban Outfitters so they could make the shirt. He’ll get a cut with each shirt they sell, and announced as much on his Tumblr, feigning surprise:

“Whhhaaat? (Lol) I’m down with this, it’s coo. Finally my shirt, made by me. It’s all good, if you’ve got some love for me……. Buy the fucking thing. I’ve got a kid to feed and who’s gonna hire a scumbag?”

This is just one of the lucrative opportunities that appeared for Boston after he became a meme. He’s also partnered with Brisk Ice Tea, which used the macro for an online ad campaign. He told the Daily Dot that a Hot Topic clothing line is in the works. This line will include a copy of Steve’s iconic Scumbag Hat, which has become a meme of its own.

For now though, if you want to wear Steve’s scummy mug, Urban Outfitters is the only place its available. Boston said he’s “not sure” when the Hot Topic line is coming out.