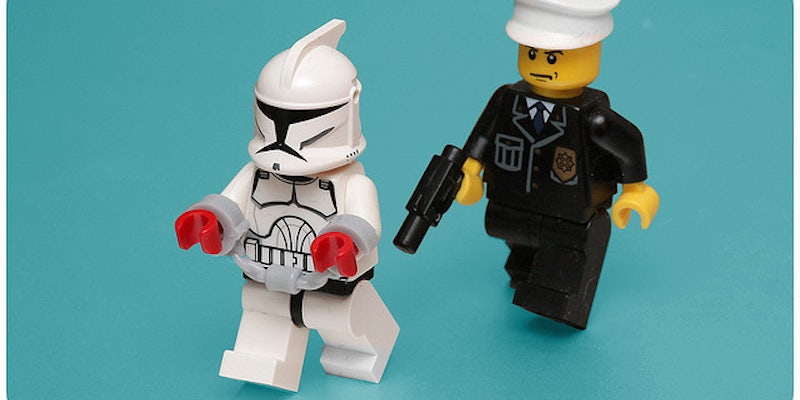 Someone's been downloading files on the home turf of the music industry's copyright cops.

Schadenfreude is sweet, and the Internet got a sugar high when people thought they had caught copyright cops red-handed downloading copies of TV shows and software used to pirate files.

Ernesto, a blogger at TorrentFreak, discovered that six different IP addresses assigned to the Recording Industry Association of America, the music industry’s trade association known for its aggressive enforcement of copyright, downloaded the first five seasons of “Dexter,” an episode of “Law and Order: SVU,” and an audio converter and MP3 tagger.

Chris Morran of the Consumerist pointed out that, according to the $150,000-per-violation standard the RIAA’s members use when suing downloaders of pirated music, those five seasons of “Dexter” were worth $9 million.

IP, or Internet Protocol, addresses, are used to identify unique connections to the Internet. While they can sometimes be linked to specific residences or machines, they often correspond to businesses, entire buildings, or wired or wireless networks of computers. In this case, the addresses appeared on a list of IP addresses controlled by the RIAA.

An RIAA spokesman told CNET News “those addresses are used by a third party vendor to serve up our public website … they are not used by RIAA staff to access the Internet.”

That response may clear RIAA staffers. But it doesn’t explain why the music industry is doing business with people it would normally deem to be pirates.

TorrentFreak’s Ernesto observed, “If official records can be wrong as the RIAA claims, then this would mean they probably accused people wrongfully also.”

Thus far, the Internet has shown a complete lack of sympathy for the RIAA. The Twitterverse responded with mass eye-rolling. Wrote @zollars, “The RIAA has been caught pirating Dexter. Their excuse? Someone else was using our IP. They need to be shut down.”

Another sarcastically noted: “This argument would totally work for me, I’m sure.”

Those views likely stem from knowing RIAA would reject such a claim from a defendant. The RIAA has sued people who don’t even own a computer, because their homes contained open wireless connections others used to pirate copyrighted content.

Another Twitterer observed that “Under #SOPA, the RIAA’s website could be suspended based on this kind of a report.” That’s a reference to the Stop Online Piracy Act, proposed legislation which would strengthen enforcement of copyright laws against websites and bypass the current legal channels copyright enforcers must pursue.

Yet the Internet’s unanimous conclusion that RIAA violated the same copyright rules it enforces against others was joined by equally unanimous doubt that it will face any legal consequences for it. Commenters on the Consumerist blog were especially skeptical.

One poster, using the moniker “Torgonius wants an edit button,” suggested a possible RIAA defense: “I would have said ‘Damn right! We have people scouring the Internet looking for pirated material. We download a copy of it and identify form where it came, and then forward that information to Legal. If you are pirating, we will find it.’”

But another reader immediately responded, “They can’t because they don’t own any rights to Dexter, as the RIAA is the goon for music. If they took that stance, then they would be legitimizing Internet vigilantism as a defense.”

Commenter Kaleey noted, “I’d be interested to see someone attempt to prosecute this based on the IP addresses. The defense would most certainly be ‘You don’t know who was at that computer at that time.’ That kind of case could easily set a precedent that would allow other RIAA victims the chance for an appeal.”

Meanwhile, Tunnen commented, “But I thought, according to [RIAA], that IP addresses were a sure fire way to identify a person. That’s what they’ve argued in court. Un-secured wireless access points, shared terminals and dynamic IPs pools between groups of PCs don’t exist …. Mind you, I did forget the ‘Do what I say, not what I do’ argument.”

And Dolemite dolorously observed, “Funny how you are responsible for your IP address, even if a roommate or neighbor is using it, but they aren’t.”

Though the lion’s share of responses to this story have focused on the RIAA, Ernesto at TorrentFreak pointed out that it’s far from the only Internet-piracy opponent caught with its hands in the BitTorrent cookie jar: Other IP addresses downloading content off of the file-sharing network include some assigned to the US Department of Homeland Security, which has a role in enforcing copyright; the residence of French president Nicholas Sarkozy, a noted copyright enforcer; and media giants Sony Pictures, Fox Entertainment and NBC Universal.