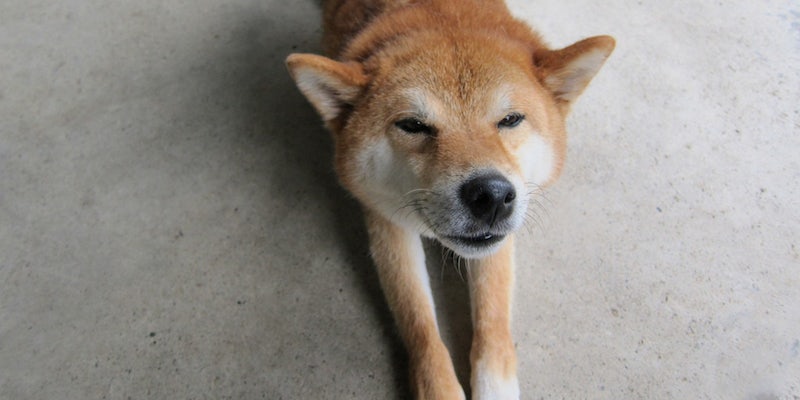 Menswear Dog is making bank. Much payday. So money. Wow.

The offline job market is terrible, but it’s reassuring to know that anyone with a cool dog and lots of stylish clothes can ride social media fandom all the way to successful Internet entrepreneurship. Menswear Dog, a Shiba Inu who wears suits for humans, is fetching upward of $15,000 a month for his owners by playing doggie dress-up.

Yes, you read that right. Yena Kim and David Fung are pulling down a barking-mad six-figure income all because they’ve made clothing their 5-year-old doge, Bodhi, a professional pursuit. “When we first dressed him up for fun [in spring 2013], he started posing for us, and doing, like, Blue Steel and Magnum,” Fung says. From there, the graphic designer and his fashion designer girlfriend posted the images to Tumblr, and Bodhi’s alter ego, Menswear Dog, was born.

#latergram of the MWD family at @clubmonaco’s flagship reopening. They know how to throw one helluva party #cm5thave

While the blog began as a pet project, photos of the bespoke Shiba soon gained so much notoriety online that big-name brands came knocking. Partnerships with Coach, American Apparel, Brooks Brothers, Salvatore Ferragamo, and Purina—and the checks that followed—allowed the couple to quit their jobs in April 2013. Fast Company profiled the finer earnings of the canine corporation and proved that owning a dog the Internet loves can be an astoundingly profitable venture.

Between the photo contracts, guest appearances, and sponsored posts on Tumblr and Instagram, a good month for Menswear Dog earns the couple somewhere in the ballpark of $15,000. When I asked what a bad month looks like, Fung and Kim say they haven’t seen less than $10,000 in “quite some time.”

For now, the couple is enjoying the “financial cushion of a (mildly) famous pet,” even though they acknowledge this type of millennial career isn’t one that will last forever. Perhaps after Bodhi’s popularity has run its course, the two can teach workshops about how to exploit your pet’s cuteness for digital fame and fortune.

If that doesn’t work, they can try to earn six figures twerking on Vine.