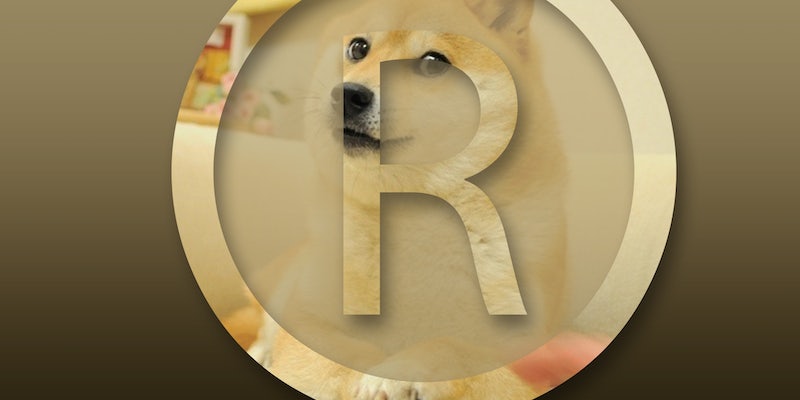 Wow, this company is trying to trademark ‘Doge’

"We didn’t think about going after anyone with the filing, nor do we plan to."

A sports memorabilia company is raising the Internet’s hackles with its attempt to trademark the beloved word “Doge.”

If successful, the trademark would be a blow to two distinct, passionate corners of the Internet: Those who like the Doge Shiba Inu meme, one of the Internet’s most popular; and those who use Dogecoin, a cryptocurrency patterned after the meme with a total market value of more than $27 million.

The company is Ultra PRO, a California-based gaming accessory company known for creating protective card sleeves and similar accessories, sold wholesale to stores around the world. On March 1, the company made an excited but little-seen announcement on its blog that it was getting in on Doge:

We are pleased to announce the launch of a new line of accessories based on Kabosu, a cute and lovely Shiba Inu which inspired countless “Doge” memes across the internet. A portion of all product sales will be donated through Kabosu’s owner to various animal shelters throughout Japan.

That’s a nod to the real life Shiba Inu behind the meme, a Japanese rescue dog. Two weeks after that blog post, Ultra PRO filed to trademark “Doge” with the U.S. patent office. Though the application is for clothing associated with the word, the company so far only has Doge card boxes for sale, as well as playing card covers. Playing mats are on their way soon, and clothing will come next.

There’s little reason to think that Ultra PRO wants “Doge” trademarked to muscle out anyone else who wants in on a fun Internet phenomenon.

“We didn’t think about going after anyone with the filing, nor do we plan to, but we always file because typically people come after us,” Ultra PRO General Manager Jay Kuo told the Daily Dot.

Good intent, however, isn’t legally binding. “It looks worrisome to me,” Corynne McSherry, Intellectual Property Director at the Electronic Frontier Foundation, told the Daily Dot. “They’ve applied to trademark the word, in connection with clothing. Not, say, a stylized version of the word. That’s pretty broad.”

Again, this likely isn’t out of a desire to create a monopoly. “Instead of filing a graphic logo, we were advised to file the word mark, which is much easier to file,” Kuo said.

McSherry said that the biggest online concern with broad trademark claims isn’t that they stifle competition from fellow merchants—it’s how trademark can be used to squelch third-party content online.

“They could announce they don’t intend to sue anybody,” she said. “It’s the extra legal process I’m much more worried about.”

“It’s very, very easy, very tempting for a company like Facebook to take down a webpage if they get a letter saying ‘this infringes my trademark,'” McSherry adds. “Facebook doesn’t want to get involved, and their default is to respond to a trademark complaint.”

Ultra PRO says that, if it does receive the ‘Doge’ trademark, it will take steps to ensure that no one who uses it fears the hammer of the law dropping on their meme-loving heads.

“Our intentions were never to block out the current market for ‘Doge’ products,” Kuo said. “If we receive the trademark we will offer royalty-free use for any vendor who wishes to use the mark.?If we do not receive the trademark, we will seek a reasonable license from the owner of the mark to use it, or we will pursue a different name for the line.”

The fact that Ultra PRO claimed their trademark wouldn’t touch people who were printing Dogecoin items, as that’s “a different name and item,” isn’t too comforting, either. Dogecoin, of course, uses the exact same image as the meme. Ultra PRO could argue that the similarity creates “consumer confusion,” and thus could petition to extend its trademark to people who license Dogecoin items.

Doge fans and Dogecoiners’ best chance to minimize the likelihood of that happening, McSherry said, is for the trademark examiner to ask Ultra PRO to narrow their claim to exactly what they’d use the word “Doge” for.

The company’s application isn’t due to be published until July 8; anyone can file an opposition with the U.S. Patent and Trademark Office before then.

Usually, McSherry said, oppositions are filed by other merchants who might sell something that could be confused with that trademark, but individuals can do so, too. And it’s not as if Dogecoiners shy away from big challenges.

Updated with additional comments from Ultra Pro with regards to its intention to offer royalty-free use of ‘Doge.’