Some merchants can't fulfill the delivery guarantees Amazon offers on their behalf, leading to negative reviews and hampered business.

Amazon is used to facing harsh criticism. In fact, for many irate customers who didn’t receive their orders on time—especially around the holidays—going online to vent about the company’s broken delivery promises almost seems like a pastime.

Take Connie V., an Amazon customer who claims on consumer complaints forum Planetfeedback that, despite paying extra for expedited delivery to ensure a Dec. 22 arrival date, her purchases did not come until the day after Christmas.

“My gifts didn’t arrive until December 26th, which made my child question why Santa didn’t bring them in his sled,” she wrote. “I wrote two complaints to the Amazon site and never even received a reply.”

Amazon probably doesn’t need to worry about comments from the Connie V.’s of the world. The brand is still synonymous with online retail, and the company’s stock price has climbed steadily in the last year. Amazon is now on track to become larger than Microsoft sometime in 2013.

The small retailers who rely on Amazon, however, don’t have the same luxury. One vicious review can do serious damage to a small online business, irrevocably ruining its reputation. And some retailers claim they’ve been harmed by the promises Amazon makes on their behalf.

Dani, for example, is the owner of New York-based jewelry story 47stcloseout.com. He used to sell his goods on Amazon through the company’s Pro Merchant program up until about two years ago, when he decided to pull his business from the site. He said the website was automatically making delivery date promises his company wasn’t prepared to meet.

“It didn’t work out well,” said Dani, who asked that his last name not be used in this story. “I think it was automatic. I tried to email Amazon, but they never dealt with it.” 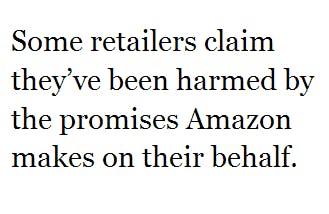 Dani said Amazon raised expectations without his consent, promising delivery in two to three days when his business was only setup to provide five-to-seven day delivery. The busted promises led to an onslaught of negative reviews and customer complaints that damaged his business.

Other merchants who used to sell on Amazon have voiced similar complaints. Teri Noboa of Childhood Way Boutique stopped selling online in part because the site left her little control over the terms of which she sold and shipped products.

“They became very difficult to work with,” Noboa said. “After a while, it was more advantageous to sell through our own site.”

Experts say the company could have a problem in its merchant program if the company’s actions are contributing to negative reviews for small business partners.

Merchants are drawn to Amazon by the promise of 85 million unique monthly visitors—45 percent more than eBay—according to the Wall Street Journal. In turn, Amazon takes a commission on every merchant sale, up to 15 percent on some items. The merchant program contributes significantly to Amazon’s overall bottom line. Between 9 and 12 percent of the $48.1 billion Amazon made last year came from professional merchant commissions.

Michael Fertik, founder and CEO of Reputation.com, which aims to improve the online reputation of retailers,

Fertik told the Daily Dot that customer feedback has become the key for small businesses who can’t afford substantial advertising, to try and drum up business online. He said just one or two negative reviews (that aren’t countered by an abundance of positive reviews) can be as bad as having no reviews at all.

“Reviews are the most important aspect of a small business’s online reputation,” he said.

It’s a trend that doesn’t bode well for Amazon’s relationship with small businesses, but some experts say such friction may just be a “transitory” problem. 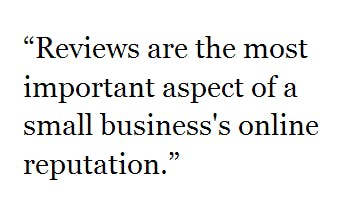 Bill McClellan of the Electronic Retailing Association (ERA) said any difficulties between Amazon and small businesses pale in comparison to the friction between small retailers and corporate chains. He said Amazon gives smaller merchants an online platform that helps them compete with the big-box retailers and their exclusive, massive online storefronts.

“I think that’s where a lot of real competition is these days that threatens small businesses,” McClellan said.

In addition to representing numerous small online retailers, the ERA counted Amazon among its members until about a year ago, when the organizations parted amicably over diverging legislative priorities. McClellan said that despite the complaints of some retailers over delivery promises, it hasn’t been a widespread problem as far as he can tell.

He said more serious problems exist between Amazon and its small business partners in terms of search-engine optimization. Many larger online retailers (not exclusively Amazon) have made it a strategy to buy the most commonly searched Google ad terms to help control the market.

“I’m not going to say there isn’t a problem with delivery times, but if there is I think it’s isolated,” he said. “There are other problems that would seem more pressing to me if I were a small business owner.”