With the season of Halloween and Thanksgiving upon us, so arrives an even more nefarious tradition: needlessly dogpiling on Pumpkin Spice Lattes. Although the PSL backlash started in earnest last year when Jezebel’s Madeleine Davies told everyone to “calm down” about the pumpkin spice craze, a recent John Oliver takedown poured water all over the gremlin of the anti-PSL movement. In the social media age, hating Pumpkin Spice Lattes is even more trendy than actually liking them.

“When the girls’ bathrooms start to smell like pumpkin spice lattes, we have a problem.” — Ohio State

The number of girls listening to Taylor Swift’s new album is directly correlated to the number of Pumpkin Spice Lattes sold to keep them up.

They should sell 2oz pumpkin spice lattes. That’s how much liquid separates the thought that I like them and realization that I don’t.

With the recent news that Starbucks is testing a beer-flavored latter and adding a Chestnut Praline Latte to its winter roster, the backlash is unlikely to die down anytime soon, as the company moves to make seasonal drinks a year-round phenomenon. Before we all foam at the mouth with anti-PSL frenzy, let’s take a moment for some perspective. Pumpkin spice lattes might be passively annoying to some, but they aren’t ruining the world.

One of the basic reasons that anti-PSL hate appeals to people is that consumers hate when brand marketing is transparent. Like the wizard behind the curtain, we’d prefer to think of corporate packaging as some kind of diffuse magic trick, rather than a manipulated corporate cash-in controlled by invisible puppet masters. We like our marketing to seem organic and grassroots, and in it’s nefarious, sugary way, the PSL is a reminder that consumer choice is an illusion.

In a post for Modern Farmer, Dan Mitchell uses the yearly frenzy over the color green around St. Patrick’s Day as a counterpoint to that corporate #PSL campaign. “Starbucks executives 10 years ago wanted to capitalize on Halloween and autumn, in much the same way that many bars capitalize on St. Patrick’s Day by putting green food coloring in beer,” Mitchell argues. “The difference is that those bars are independent businesses, so the green-beer phenomenon seems more grass-roots, less engineered, less corporate. Many people find green beer to be obnoxious, but, probably thanks to its uncertain origins, they don’t feel like they’re being manipulated by some heartless corporate marketing department.”

But the problem is that whether you like it or not, you are being manipulated by your love of the Irish and day-drinking. For every local pub that’s joyously tipping its hat to liver-poisoners’ favorite holiday, you have the thousands of stores that remind you to buy green each year, or stock up on your “Kiss Me I’m Irish” or “Fuck Me I’m Drunk” T-shirts. It might feel less nefarious because it’s part of a time-honored holiday, but like Valentine’s Day or Sweetest Day, the red-headed stepchild of holidays, the entire way we think about and celebrate that tradition is marked by corporations. After all, would you love beer as much as you do if not for years of corporate America telling you to drink up?

It might make you feel you’re sticking it to the man to take a stand against tweeting a haiku about Pumpkin Spice Lattes, but the only way to escape branding at this point is to live on Mars, and look at how well that’s turning out.

2) If you’re shocked that there’s no pumpkin in Pumpkin Spice Lattes, you don’t know what capitalism is.

I’m one of those people who lives for trying weird flavors of potato chip, not just the Kettle Chips-brand Thai Spice or Maple Bacon. That’s beginner stuff. I’m talking about chips that taste like chicken and waffles, lamb and mint, cheeseburgers, hot dogs, or sometimes just ketchup — which is as gross as it sounds. It shouldn’t come as a shock to you that there are no waffles, dead cows, or adorable sheep in my potato chips, but for some reason, it actively bothers food bloggers that there’s no pumpkin in pumpkin spice. And thank god, because that would be disgusting.

In an article for Gizmodo, Kate Knibbs (formerly of the Daily Dot) outlines her frustration with the lack of pumpkin in the drink. “The PSL™ has attained such a devoted fan base that the fundamental dishonesty behind the name is especially rankling,” Knibbs says. “Sure, Starbucks will admit that the drink is pumpkin-free. But it still puts the word ‘pumpkin’ front and center, and it really shouldn’t. It shouldn’t even want to. Have you tasted raw pumpkin? It tastes like dirt, not Halloween. Starbucks has invented a superior flavor, which they should celebrate. They just shouldn’t masquerade it as remotely related to pumpkins.”

The problem with this line of logic is that branding the PSL as a “pumpkin” drink is no more “dishonest” than the fact that Kool-Aid sells grape, cherry, and watermelon mixes to its customers, none of which contain fruit because they are basically pixie sticks in a different container. All of those are fruit flavors, and as Time’s Mandy Oaklander explains, the PSL flavor is concocted from a mixture of nutmeg, cinnamon, ginger, and cloves. “There’s no pumpkin in it because it’s pumpkin spice, and not pumpkin,” Oaklander continues. “It’s supposed to taste like the spicy components of a homemade pumpkin pie, not actual pumpkin.”

If you really want to get upset about something, skip the thing you wouldn’t want anyway, because having floating chunks of pumpkin in your morning pick-me-up would be horrific. Get upset about the PSL’s sugar content: 49 grams of future diabetes in a cup.

3) The pumpkin boom isn’t hurting you.

There’s no denying that pumpkin is ludicrously popular right now, as CNN reports that sales of everyone’s favorite fall vegetable have skyrocketed in recent years, up 34 percent since 2009; the frenzy over pumpkins reached a breaking point at a New Hampshire, where a college’s fall festival celebration led to widespread rioting. That might sound like an Onion headline, but that’s because it almost is. The satirical newspaper’s “Mr. Autumn Man” perfectly parodies the very real obsession with all things fall, and the pumpkin’s place at the center of that.

The fall craze is even starting to bleed into summer, and not just because of climate change. This year, Starbucks started offering the PSL in August, matching wider marketing trends that begin capitalizing off our love of the season before the previous one is even over. If it feels like corporate America taking over your summer the way Black Friday is creeping into Thanksgiving, remember that there wouldn’t be supply without demand, and in the case of the PSL, it’s genuinely overwhelming. Over the past five years, online interest has exploded, over seven times its 2009 rate.

However, the PSL’s media profile makes its widespread popularity appear more inescapable and oppressive than it actually is. Part of that has to do with the ways in which Twitter, Facebook, and social media have made us more aware of #PSL fandom, as Starbucks customers post pictures of themselves on Instagram or count down the days to their first PSL sip on Facebook. Anti-PSL people don’t get upset that Starbucks sells a vaguely gross drink people happen to like anyway; they’re upset that they have to hear about it constantly, even if they don’t really. How many seconds of your day do you actually spend seeing pumpkin spice lattes on your news feed or thinking about them? Probably not many.

Likewise, it might be annoying that stores are finding ways to cash in on the pumpkin craze with Pumpkin Pringles, M&Ms, and Oreos, but it’s no different than the seasonal frenzy over Girl Scout Cookies or the baconizing of everything, neither of which have ignited the wrath of John Oliver. And if it’s any consolation to pumpkin haters, the love of Thin Mints and crispy pig meat peaked in 2011 and 2012, respectively, showing that the PSL madness will likely end—and soon.

Despite the fact that we can get bacon-flavored ice cream, condoms, envelopes, dental floss, wallets, toothpicks, vodka, belts, lunchboxes, and soap, the pumpkin boom seems to bother us more than the interest in bacon. Why?

To answer that question, you have to look at who is consuming Pumpkin Spice Lattes. Although the Onion’s take on the fall craze put a male slant on the #PSL love, the popularized version of a stereotypical fall lover is almost always female. If you’ve ever read an article cataloging the behaviors of the “Basic Bitch,” the Internet’s hot topic du jour, you know that she loves fall: visits to the orchard, apple cider, and basically any excuse the nefarious “Basic Bitch” can devise to wear her trusty Ugg boots in public. On two such posts, a love of PSLs lands at number two in defining the profile of the “Basic Bitch,” along with liking Mean Girls, Nickelback, and Adam Sandler movies. 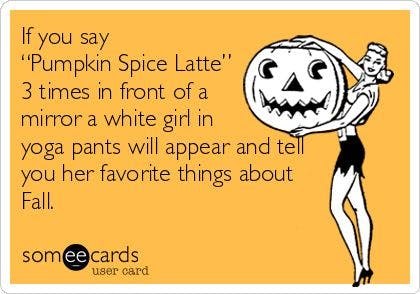 The problem is that calling people out as Nickelback or Adam Sandler fans is basically the lowest-hanging fruit that exists, a time-honored way of making yourself feel categorically superior. “It seems to me that while what it pretends to criticize is unoriginality of thought and action, most of what basic actually seeks to dismiss is consumption patterns—what you watch, what you drink, what you wear, and what you buy—without dismissing consumption itself,” New York’s Noreen Malone writes of our obsession with PSLs and basicness. “The basic girl’s sin isn’t liking to shop, it’s cluelessly lusting after the wrong brands, the ones that announce themselves loudly and have shareholders they need to satisfy.”

As Malone argues, it also reeks of casual misogyny, another way in which we police the wrong kind of female behavior, holding up a certain type of female behavior as desirable while knocking down another. Vice even held a “Basic Bitch” tournament, which was (of course) won by Gwyneth Paltrow, who loves the pumpkin craze so much that she has her own Pumpkin Pie Smoothie recipe.

It might seem like a feminist act to criticize Paltrow, PSLs, or anything that reeks of overconsumption, but it’s not, as Daisy Buchanan argues in the Guardian. “I learned that when I decided not to rent a room in a flat from a man in Uxbridge who made a point of telling me the property had many cupboards, which would be good ‘because females have a lot of stuff,’” Buchanan writes. “But if you are a ‘female with a lot of stuff,’ or a woman who is fond of scented wax, or posses several sequinned scatter cushions, you are still worthy of respect.”

This bullet is the simplest, but it’s also the most important. If you find yourself getting riled up about Pumpkin Spice Lattes, remember that you have more important things to criticize: like ubiquitous government surveillance, the impending collapse of Earth’s biosphere due to global warming, the NFL’s stance on domestic violence, America’s system of wage inequality, or pretty much anything James Franco does. Bashing Stuff White Women Like on social media might get you some high-fives from your fellow Nickelback and PSL haters, but it’s lazy and a waste of everyone’s time.

Pumpkin spice lattes are like Lena Dunham of caffeinated beverages: Everyone has an opinion on them and the type of person who likes them, but trust me, no one wants to hear it.

Photo via joiseyshowaa/Flickr (CC BY 2.0)