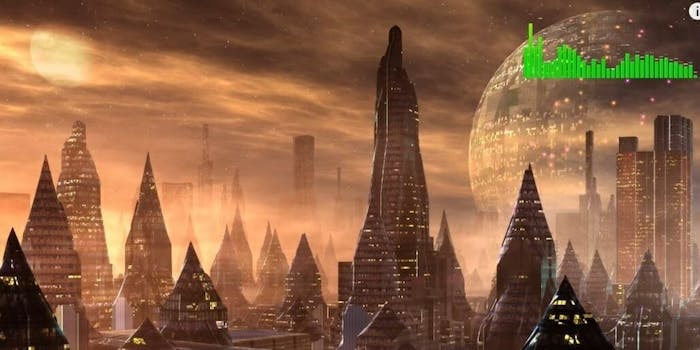 He gets very specific.

Want to know what’s going to happen in the year 2033? According to a YouTube time traveler, everything from chips implanted in your forehead, free food for everybody, and dinosaur zoos will become prevalent within the next 14 years.

Daryl Dean, the supposed time traveler, wrote in and asked that ApexTV publish the audio clip he sent to the site’s email inbox. He said he’d only be in the year 2018 for a brief time (it’s unclear if his trip has been extended into 2019), and he wanted to come forward to let current-day people know what they can expect to happen in the future. The ApexTV channel says it publishes accounts from “time travelers” who reach out, and though they are easy to write off as cheap CGI goofballs, the channel has snowballed a millions-strong audience of YouTube views.

Basically, Dean gives a timeline of what’s to come.

“What I’m about to say is going to be very hard to believe for a lot of people,” Dean said. “All that I ask of you is whoever is out there listening to this in whatever year you happen to be in, keep an open mind.”

Like usual for the supposed YouTube time travelers, Dean said time travel will be released to the public next decade—in this case, it’ll occur in 2028. He also said the existence of aliens will be fully realized at about the same time, while global warming will cause oceans to swallow a number of major cities (another time traveler previously displayed a map of the U.S. from 2030 that would confirm that theory).

He also talked about how dinosaur zoos exist in the future where customers can watch T-Rex, triceratops, and wooly mammoths in a display that hopefully has more security than that from Jurassic Park.

Here are some more specific predictions from Dean and when they’ll occur:

2021: A chip will be released that allows your brain to become six times more powerful by tapping directly into the internet. It’ll be implanted in your forehead along with another chip to be inserted in your right hand that will allow you to pay for products without having to use cash or a credit card (apparently cash will disappear in the future). This also allows humans to connect with each other via telepathy. Remember, another YouTube time traveler said that implanted chips will save millions of lives.

Early 2020s: Exosuits are released that allow normal humans to run for miles without getting tired and to lift objects that are thousands of pounds with ease.

2022: The U.S. announces that all food will be made available to its citizens for free.

2025: A base on the moon is officially opened, and people from Earth can visit it if they pay enough money.

2026: Because we can 3D-print body organs and other body parts, almost all diseases are cured.

2030: The act of teleportation (kind of like this) is released.

2033: The population of the Earth will hit 9 billion. Currently, that figure stands at about 7.7 billion.

3000: This is the furthest Dean said he’s gone into the future, and he describes it as a “utopia.” That’s unlike this supposed time traveler who apparently passed a lie-detector test when he said the year 3000 was filled with pollution and radiation.

All of his talk, though, seems to make Dean depressed.

“Coming back to 2018 has made me think about just how much faster the future is for everything,” he said. “I’m actually getting pretty bored being here.”

But the best news of all might be what happens in 2021: According to Dean, Earth is getting planet-wide free Wi-Fi.