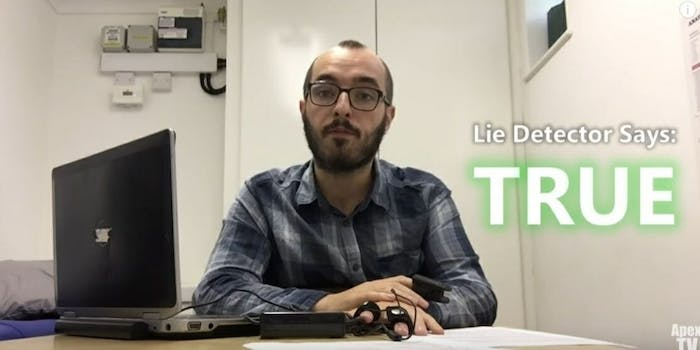 He said he met beings with ‘abnormally large heads.’

Unlike some other supposed time travelers who blur their faces and modify their voices in the hopes of remaining anonymous, a man named William Taylor who said he traveled nearly 7,000 years into the future was fully in the open during his ApexTV YouTube channel interview.

Taylor, a bearded man with glasses and a British accent wearing a plaid shirt, is hooked up to a lie detector test for this interview, and he discusses his experiences of visiting the year 8973. Unlike the man with a Russian accent who recently claimed to have photographic proof that he visited 16th-century China or the guy who brought back video footage from Las Vegas in 2120, Taylor has no problem letting his real voice be heard or his face to be seen.

Taylor said he journeyed far into the future on a top secret mission with the British government, and on his travels, he said he met many human-robot hybrids with “abnormally large heads” and big eyes.

“I spoke to them for quite some time,” Taylor said. “They told me they live forever. They also didn’t seem too surprised that I was there, which led me to believe that time travel was quite a commonplace thing at that period of time in the future.”

Taylor, who has been more than a millennium into the future before, also explained how different the year 3000 is from the year 8973, which he called a utopia.

“The sky (in 3000) was completely red,” he said. “There was pollution everywhere, and I didn’t see a single person during the trip. … Through that smog, I could see the lights of some sort of flying transportation. I did pick up on my radiation meter that there was quite a bit of radiation in the air. I had to get back in my time traveling machine quite quickly and exit it quite abruptly.”

You can watch the entire video below, in which Taylor describes his time traveler machine (sadly, there’s no mention of a DeLorean or any kind of plutonium fuel), how the actual mechanisms of time travel work, whether paradoxes exist, and how he got to be a time traveler in the first place.

As the interviewer explains, lie detector tests aren’t 100 percent accurate, and Taylor isn’t the first supposed time traveler to take (and pass) an examination of these sorts. The guy who went to Las Vegas and talked about the “red clouds from global warming” did, as well.

The lie detector does catch Taylor in one lie, but it only serves to further the story of a brave man who has journeyed to the future and lived to tell about it. And it sounds like if he could go back to the future, Taylor would immediately hop into his time traveling machine and head right back to 8973, where diseases are eradicated and where beings communicate telepathically.

Taylor makes it sound like a darn paradise—if, of course, you can believe his outlandish tale.