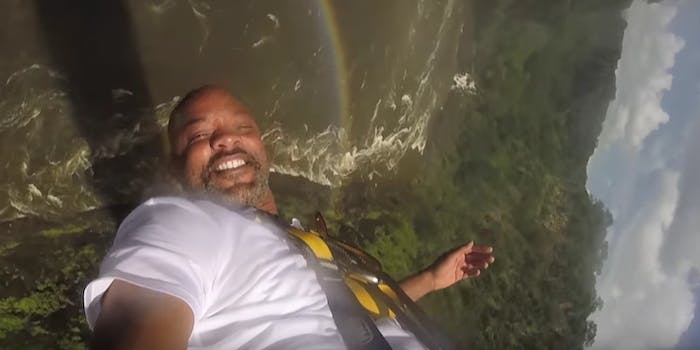 Here’s everything YouTube is offering this year, including Will Smith jumping out of a helicopter

YouTube announced Thursday that it would livestream Will Smith bungee-jumping from a helicopter into the Grand Canyon, as the streaming platform updated advertisers on plans for the upcoming year in its annual BrandCast presentation.

The splashiest news was that Smith, who has amassed 1.8 million subscribers on his YouTube channel since starting it last December, would dive from a helicopter during a YouTube stream on his 50th birthday in September. The stunt will attempt to raise money for charity.

In addition to that new show, YouTube is bringing back some “audience favorites” that generated “significant viewership,” including an untitled Demi Lovato project (“to raise awareness about issues that matter”), the second season of the Super Slow Show featuring the Slow Mo Guys, and the second season of Kevin Hart’s What the Fit series.

But YouTube CEO Susan Wojcicki also had to explain how the platform is trying to keep its audience safe. YouTube has been beset by problems that include an algorithm that often shows inappropriate material to children and conspiracy videos that litter the platform whenever there’s a national tragedy. There was also a recent report that advertising for 300 companies and brands were being shown on “extremist” YouTube channels that included videos on white nationalism, Nazism, and pedophilia.

“It is critically important to me, and to everyone at YouTube, that we grow responsibly,” Wojcicki said Thursday at BrandCast, via Variety. “There is not a playbook for how open platforms operate at our scale. But the way I think about it is, it’s critical that we are on the right side of history.”

Though Wojcicki didn’t mention any new solutions to those specific problems, YouTube last year announced plans to add 10,000 moderators to review questionable content and remove it if necessary. Wojcicki also said in March that the site would begin using “information cues” that would provide links to websites with more truthful information about the video’s topic.

“Together we will usher in the next era of entertainment and information,” she said.

Aside from the Smith helicopter jump, YouTube also announced new series from actress Priyanka Chopra (who will seek advice from the most successful people around the globe), comedian Jack Whitehall (who will train with some of the best soccer players in the world), and former basketball star Jay Williams (who follows a Newark, New Jersey high school basketball team for a season).

“I’m big into YouTube as it is,” Williams told the Daily Dot in an interview last month. “We felt it was an interesting platform.”

As AdWeek pointed out, YouTube announced that it has 1.8 billion logged-in users and that users watch the platform on TV for 150 million hours per day.

“We’ve also seen that with openness also comes challenges, as some have tried to take advantage of our services,” Wojcicki said. “This year we devoted tremendous resources to address these challenges, and we are committed to continuing our investment going forward.”