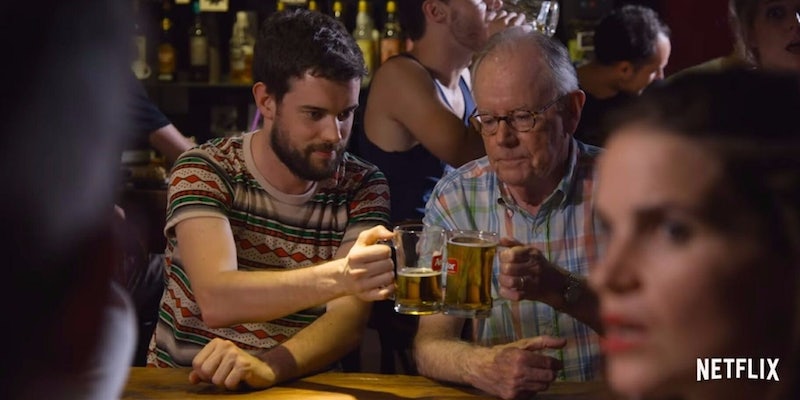 A comedian and his dad travel the world.

For those privileged enough to participate in the tradition, taking a “gap year” off before diving into college or work can be a wonderful excuse to travel. British comedian Jack Whitehall never got to travel during his gap year—he was too busy crafting his standup comedy skills. A decade later, Whitehall has leveraged his standup success to try to rectify that, but with a twist. In Jack Whitehall: Travels with My Father, Jack spends five weeks kicking around southeast Asia … with his 76-year-old dad Michael in tow.

Any good travel show needs at least two things to work: exotic locations that can fill even the most devout homebody with a case of wanderlust and a colorful personality or two to serve as the anchor for the audience’s proxy explorations. Travels with My Father easily ticks off the first box. During the course of six 30-minute episodes, Jack and his dad travel throughout Thailand, Cambodia, and Vietnam, with their forays ranging from tourism staples like Bangkok and the ruins of Angkor Wat, to smaller villages and swaths of gorgeous Asian countryside.

As for the personality department, Jack and his father make for an enjoyable and entertaining odd couple. Jack is eager to get the full gap year experience, crashing in hostels and backpacking from place to place. Unsurprisingly, his septuagenarian pops is having none of that … at least not at first. When they arrive in the first hostel in Bangkok, Michael stays just long enough to say, “No,” and then turns on his heels in search of the nearest five-star hotel. The first few episodes play up this headbutting between father and son quite a lot, with both eager to make the most of their trip, but operating under very different agendas. At first, it looks as though Jack’s plans for a rough-and-tumble vacation may be sidelined by dad’s credit cards and hotel reservations, but Michael soon begins to soften and try new things however reluctantly.

Anyone who’s seen An Idiot Abroad will instantly note similarities between that show and this one, but while Idiot saw Ricky Gervais and Stephen Merchant taking great pleasure in forcing their dour friend Karl Pilkington into places and activities he wanted nothing to do with, Travels with My Father is much less sadistic and ultimately working toward the noble goal of bringing the two Whitehalls closer together. In An Idiot Abroad, Gervais and Merchant were very much laughing at their hapless star. Here, there are plenty of laughs at the expense of both the elder and younger Whitehalls, but they’re all good-natured.

If there’s a primary complaint about Travels with My Father, it’s that it sometimes presents situations and punchlines that seem a little too perfect to be entirely unscripted. That’s hardly rare when it comes to ostensible “reality” programming, but here it’s just distracting more often than not. The casual bickering between Jack and Michael is entertaining enough without the forced wackiness, adopted dolls, or Steven Seagal sightings.

Thankfully, that stuff seems to fade as the show progresses, even as Michael loosens up and seems to embrace the spirit of the trip. The show is at its best when the humor and heart arises from little moments the cameras capture that clearly weren’t planned, whether it’s Jack bristling at his dad’s default critical stance or Michael trying to hide a smile when one of Jack’s many dumb jokes actually gets past his defenses. The pair are a lot of fun to watch even at their crankiest, so the show needn’t have tried so hard for setup laughs when simply letting the two of them be who they are around each other provides plenty of entertainment.

Packed with gorgeous scenery and easy charm, Jack Whitehall: Travels with My Father is a lovely, easily binge-able addition to the Netflix catalog. It’s not a trip you’ll regret taking.