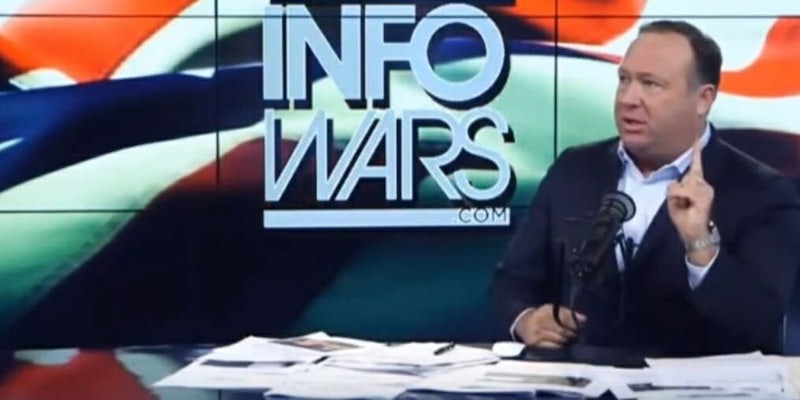 No, YouTube is not about to delete Alex Jones’ Infowars channel

Jones said his channel has been frozen.

Alex Jones on Saturday claimed that YouTube is going to delete his Infowars channel on Sunday. According to YouTube, that’s simply not true.

This is what Jones—the far-right conspiracy theorist whose channel was given two strikes by YouTube last week for his videos covering the Parkland shooting, pushing him only one step away from deletion—tweeted Saturday.

But according to BuzzFeed’s Charlie Warzel, YouTube doesn’t have current plans to erase Jones’ channel.

I reached out to YouTube about this – it’s not true. Been informed there’s no plan to erase the channel tomorrow, as Jones says. https://t.co/VFiAIesB8A

YT DID tell Jones that advertisers reached out and asked to be removed from channel. But YT didnt tell Jones what he claims. Furthermore, YT says this isn’t even how the account termination process happens (getting advance warning)

Jones has had a tough week. He faced sexual harassment and anti-Semitism charges by two former employees, he begged a teenager to stop defaming him, and a number of YouTube advertisers pulled their ads from his channel.

Update 1:14pm CT: YouTube made a similar statement to the Daily Dot on Sunday afternoon, saying it did not tell Jones his channel would be deleted and that it had no plans to terminate his account on Sunday.